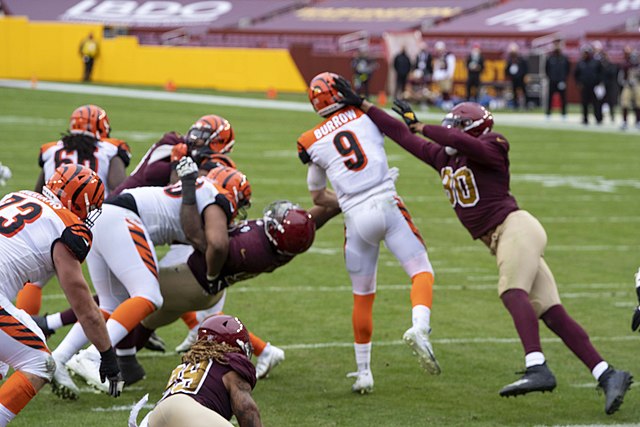 With Free Agency well underway it’s time to look at how the Browns rivals in the AFC North and the wider AFC have fared so far. Let’s start with their two main rivals for the AFC North Division crown.

One of the key moves the Ravens have made is to extend the contract of Jim Harbaugh for another 3 years. He has masterminded a regular-season record of 137 wins, to 88 losses, 4 Division Titles, 11 post-season wins, 8 losses, and 1 Super Bowl. The Ravens play a certain brand of football very well and are a tough team to beat. They were injury-ravaged last season yet still won 8 games and this comes down to coaching and team spirit. Do not be fooled into thinking that because they finished last in the AFC North in 2021 they’re a spent force.

The Ravens have spent over $100 million so far in Free Agency and still have about $10 million to play with. Their biggest addition is Safety Marcus Williams who they’ve signed for $70 million over 5 years from the Saints. Williams is one of the top Safeties and fits the Ravens brand of Defensive football perfectly. He has consistently recorded PFF grades above 74 and when targeted in 2021 he achieved his career-best grades in yards/target against him and completion % against him. Last season his overall PFF grade was 80.1. He replaces DeShon Elliott who only played 6 games last season. He’s a definite upgrade and has an excellent injury-free record. They have added a much-needed Right Tackle in Morgan Moses who signed for $15 million over 3 years, which frankly is a steal in itself. Moses had an overall PFF grade of 71 last season and is a solid RT with an injury-free history of playing 113 consecutive games. The Ravens were in turmoil at their Tackle position last season so Moses is an important addition.

Interestingly the Ravens spent more money on a Defensive Tackle than they did on a Right Tackle bringing in Michael Pierce for $16.5 million over 3 years. He is an early-down Nose Tackle and a good run blocker with an overall PFF grade last season of 78.5. At 340 lbs he’s a hard man to run past, but his pass rush grade was 84.5 so for a big man he’s no slouch! The Ravens have re-signed DT Aaron Crawford who didn’t play last season, but who in 2020 had an overall PFF grade of 72.5 and who had a better run blocking grade than Pierce. These two DTs will make a solid anchor to the Ravens Defensive Line and if Calais Campbell returns that’s a position of strength. They haven’t had any success in improving their Defensive Edge room missing out on Za’Darius Smith and Arden Key. At the moment they’ve only got Justin Madubuike and Broderick Washington so this is a concern for the team.

On the Offensive side of the ball the Ravens still haven’t extended Lamar Jackson and this might be a lot to do with the Browns signing Deshaun Watson for a fully guaranteed contract of $230 million. I’m assuming they will extend Lamar, but they still need a Centre having lost their starting 2021 Centre Bradley Bozeman who was a very solid player last year. He’s gone to the Panthers for a 1 year $2.8 million deal and I’m surprised the Ravens didn’t re-sign him since this leaves Trystan Colon as their likely starting Centre with a PFF grade of 62.6 last season, although his pass blocking grade was very good at 74.5. I’ve mentioned already that the Ravens have a brand that they stick to. Full Back Patrick Ricard re-signed at $11.25 million over 3 years is a classic example with most NFL teams ditching FBs. Last season was his best season in 3 years with 2 carries for 4 yards, but he has made 3 consecutive Pro-Bowls and Lamar does play better with him on the pitch. Overall I’d say the Ravens have improved their Defense, but not their Offense- so far.

The reigning AFC Champions who narrowly missed out on a first Super Bowl win have definitely improved on Offense and in the area they were weakest, namely their Offensive Line. They have added:

On PFF grades using 2021 season stats this has significantly strengthened their OL from 61.4 to 75.7. Ted Karras actually plays better as Left Guard so the Bengals might be in the market for a Centre. La’el Collins scored a PFF grade of 82 last season, Karras 72.8, and Alex Cappa 74.2. Left Tackle is Jonah Williams who graded 77.1, but depth is still a concern with Guard Quinton Spain (PFF grade 72.3) needing to be re-signed as otherwise, the Bengals next highest Guard will be Jackson Carmon on 56.3. D’Ante Smith and Hakeem Adenji are both worse than Carmon. Both Tackles Collins and Williams have a tiny concern over injuries, but nothing to really worry the Bengals coaching staff. Tackle depth will be a concern for the Bengals should these two get injured Isaiah Prince is about it with an overall grade of 58.0 last season, although his run-blocking grade was 73.7. Riley Reiff is a Free Agent they could bring back as a depth piece who would be fairly solid. The other offensive addition to the Bengals is Tight End Hayden Hurst who replaces CJ Uzomah whose stats were much better than Hayden’s last year. Uzomah had 493 receiving yards, which was 20th in the league, and 5 receiving touchdowns which were 9th. Hurst had 221 receiving yards and 3 receiving touchdowns. Uzomah is a loss and Hurst has a 1 year deal so expect the Bengals to draft a TE although these are notoriously slow starters in the NFL.

On the defensive side of the ball, the Bengals have made some important re-signings in CB Eli Apple and DT B.J Hill. Most importantly they retain CB Chidobe Awuzie who had an overall coverage grade of 84.2 last season and CB Mike Hilton who graded 73.6 in coverage. Rumours are they’re interested in CB Stephon Gilmore who would be an excellent addition. They do need to think about their Safety position so Jessie Bates should probably be extended, but overall this Defense is solid, with the CB Room a strength. However, we all know that teams are going to have to outscore the Bengals with QB Joe Burrow, WR Ja’Marr Chase, WR Tyler Boyd, WR Tee Higgins and RB Joe Mixon being quite the arsenal of weapons!

The Bengals have improved significantly in the area they were weakest in and on the side of the ball that scores the points. The Ravens have improved in Defense with question marks remaining over Lamar Jackson’s consistency. The Bengals have to remain the favourites to retain the AFC North Division Title, but if the Browns can get Watson playing sooner rather than later they might be more of a threat to the Bengals later in the season and in to the postseason.