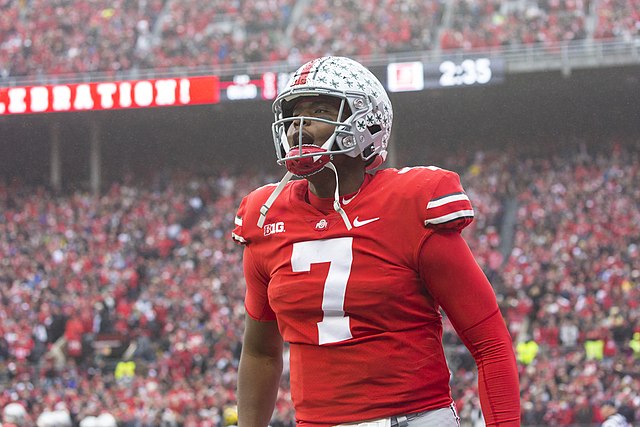 The former Ohio State legend Dwayne Haskins Jr. tragically passed away on Saturday at the ripe age of 24. Haskins played in the NFL last season for the Pittsburgh Steelers and Mike Tomlin made it clear that he wanted Haskins back by re-signing him this offseason.

Haskins entered the NFL with a very impressive CFB resume. He was the 2019 Rose Bowl MVP and he was a superb OSU QB all-around. He beat out Joe Burrow to be Ohio State’s starting QB in 2018 and he showed his ability well that season. He threw for 4,831 yards and 50 passing touchdowns in 2018-2019. There are bobbleheads of the Haskins all across the US.

His talent at OSU was a big reason why he was the 15th overall pick in the 2019 NFL draft by the Washington Commanders. He was taking positive strides with Washington, but he wasn’t quite able to blossom in the nation’s capital. Mike Tomlin saw a lot of potential in his arm ability, so he gave him a shot to prove that he could be Big Ben’s successor.

He wasn’t quite able to blast off with the Steelers in year one, but his work ethic impressed Tomlin in 2021-2022. The Steelers HC made it clear that Haskins and Mason Rudolph would have opportunities to start in a Black and Yellow uniform. Mitchell Trubisky recently joined the Steelers QB conversation, as well.

Haskins will be remembered as one of the best OSU players, a talented QB prospect in the league, and a very affectionate person to touch this world. Unfortunately, he was another special soul that was taken away from this verse way too soon. It’s time for the football community to give condolences to his family, Steelers nation, and Buckeye fans at this moment.