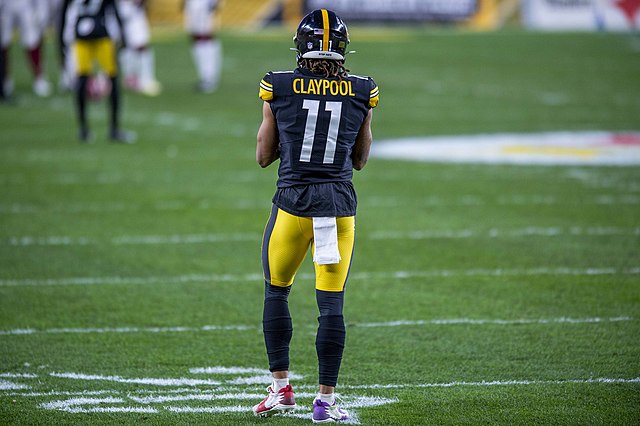 The Pittsburgh Steelers have a special long-term wide receiver in Chase Claypool. The 23-year-old from Abbotsford, Canada has already stated that he doesn’t care who his starting quarterback is, as he’s still fully prepared to be a reliable weapon for any QB in many seasons to come.

Claypool has been quite a slightly effective chess piece for the Steelers offense in his two seasons thus far. In 2020, he recorded 62 receptions (109 targets), 873 yds, and 9 touchdowns. After his rookie season, he notched 59 receptions and 860 yards.

Claypool will definitely have an increased role in the JuJu Smith-less offense in Pittsburgh. Diontae Johnson was a monster in 2021 (107/1,161/8), but Claypool will certainly attract his fair share of targets. He should also really help replace JuJu’s red-zone presence (9 touchdowns in 2020). I expect Mitchell Trubisky to be the starter in 2022 and he should be an upgrade over the 2021 version of Big Ben, too.

Trubisky may not be a true MVP-caliber QB, but he did help his mediocre Bears offense reach the playoffs in 2020. He reached the Pro Bowl in 2018 and I believe he could be an “a prime Andy Dalton” or “prime Matt Schaub” for the Steelers for a couple of seasons. If Pickett is groomed as the QB2 at the start, he should soon be the starting QB.

I honestly am a big fan of Chase Chase Claypool’s outlook. His WR partner in Johnson is ranked as the 14th ranked WR in dynasty PPR via Fantasy Pros, while he is cemented as the 35th best WR. I love the floor for Claypool, as he should be very involved and he could really be a secret superstar. If Pickett can be the “next Big Ben”, Claypool could have a tremendous career, to say the least. It’s time to buy the WR that was often compared to Calvin Johnson Jr. as a draft prospect.