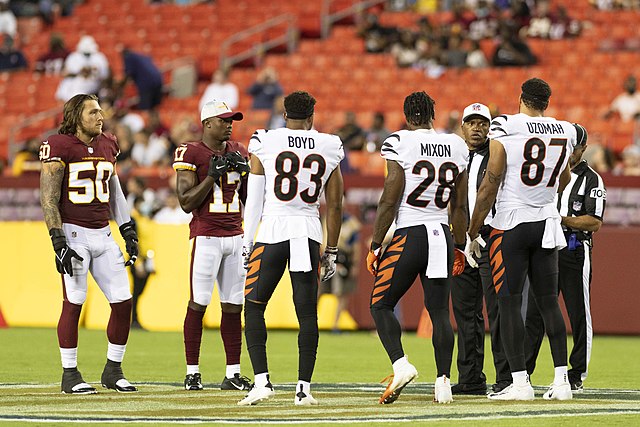 The Cincinnati Bengals had improved their Super Bowl roster over the off-season, by upgrading their offensive line, but they still had the depth to fill in their secondary. In their 2022 Draft they added the following 6 players:

I really like what the Bengals did in this Draft, selecting quality depth/rotational players in positions of need and continuing a trend of really solid Draft selections in recent years. My only concern is their limited number of picks meaning most of these players really need to make it. The Bengals have added the following UDFA:

In the Draft, the Bengals added two safeties and a CB to their Secondary and all 3 are versatile players. Daxton Hill is 6.0, 191lbs, and ran the 40 yards in 4.38 seconds. Last season he had 70 tackles, 4.5 for loss, 2 interceptions, and 9 pass breakups. He’s got explosive speed and can play zone and man coverage plus has been used a lot in the slot. I really like this pick for the Bengals and think he’s an excellent addition to their roster. Cam-Taylor Britt is a boundary CB that the Bengals are in need of. He’s 5.11, 196lbs, and also speedy running 40 yards in 4.38 seconds. In 2021 he had 11 pass breakups, 51 tackles, 3 tackles for loss, 1 sack, 1 interception, and 1 blocked kick. He’s not afraid to hit hard and is the sort of player I’m seeing as a classic Bengals man. Tycen Anderson is a strong safety at 6.2, 209lbs, but fast with a 40 yard dash of 4.36. In 2019 he had 84 tackles, and in 2021 he had 44 tackles, 2 for loss, 2 pass breakups and 1 sack. The Bengals have picked up a box safety with speed who likes tackling. Hill and Anderson are perfect fits for a Division including the Ravens and Lamar Jackson who like opening up running lanes.

On the Defensive Line, the Bengals added two quality rotational players. Zachary Carter is 6.4 and 282lbs. He adds a lot of power, is versatile as he can play interior DE and will work well with DJ Reader. Jeffrey Gunter is slightly light for a DE at 258lbs, but he’s had 2 very productive seasons with Coastal Carolina. In 2020 he recorded 58 tackles, 12.5 for loss, and 6.5 sacks. In 2021 he recorded 41 tackles, 10 for loss, 6.5 sacks and 2 forced fumbles. With just 10 picks left in the Draft, he could be a real steal for the Bengals.

Cordell Volson is a bit of a beast at 6.6 315lbs and has played both LT and RT, most recently at LT. I suspect he’s been brought in more as an early-down run blocker which will be good against the opponents in the AFC North.

I really like the Bengals Draft strategy, the type of players they’ve brought in, who they’ve brought in and I think they’ve really strengthened their roster in the off-season. For me, this is an A grade Draft. For a team that reached the Super Bowl last season, they will have every expectation of returning there, but they will need to be very wary of the Ravens and Browns, who are returning from injury-ravaged seasons, and the Chiefs and Bills, both who whom Drafted well.