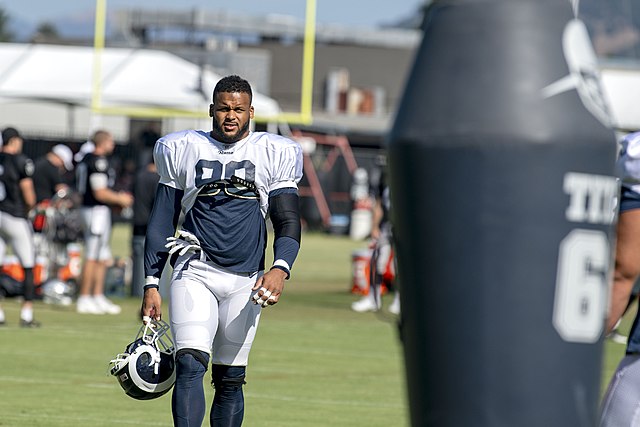 The NFC West showcases numerous future Hall of Fame pass rushers — such as the newly well-compensated Aaron Donald and the versatile, maniac J.J. Watt. With that said, I’m going to simply highlight the unearthly defensive DL in the NFC West and rank the top pass rushers in the wild NFC West.

There isn’t any debate that AD is the top pass rusher in his division. The Rams DT has been named first-team All-Pro in each of the past seven seasons. He has also only missed two games in the past six seasons. He led his team in sacks (12.5) and QB hits (25) in 2021. He has been the highest-graded defender by PFF for six straight seasons — as PFF gave him a 93.6 grade in 2021. The highest-paid non-QB in NFL history flexed his ability in Super Bowl LVI with two sacks and a pivotal pressure against Joe Burrow on the Bengals last offensive play.

Markus Golden has been quite productive for the Cardinals and he also has been able to stay healthy (contrary to Watt) — as he’s missed one game in the past three seasons. Golden ousted 11 sacks (.5 sack more than Chandler Jones), 19 QB hits, 10 TFLs, and four forced fumbles last season. The former Cardinal has been a Pro Bowl snub and he expressed that he should continue to excel in the Cards pass-rushing unit without Jones. Per NFL.com, Golden stated, “I respect him and learned a lot from Chandler. I can seriously he helped me become the player I am today. But whether I am playing with Chandler or anybody else, I feel like I’m a No. 1 pass rusher. You’ve got to have that mindset”.

The two-time DPOY winner J.J. Watt may not crack 10+ sacks in 2022, but he can still be a top-tier pass-rushing menace. Watt only played in seven games last season, but he still earned an impressive 79 grade by PFF. Arizona Sports 98.7 outlined how Watt led all pass rushers in QB hits and placed second in pressures after five games last season. Watt will definitely to have more sacks on his belt next season — as he chases his first Super Bowl ring with AZ and likely Kyler Murray.

Leonard Floyd is the second edge rusher on this list that will look to amp up his sack total after losing an edge-rushing mate (as Von Miller went to Buffalo). Floyd had 9.5 sacks last season (after a 10.5 sack season in 2020). He also had 18 QB hits, 70 combined tackles, and 7 TFLs in 2021. He had a 70.4 grade by PFF. He might not be the sexiest run stopper, but he can certainly excel in pass-rushing situations. The former Bears first-round that signed a four-year contract worth $64 million dollars in the 2021 off-season will look to reach his first Pro Bowl in 2022.

The Seahawks defensive end Darrell Taylor quietly had a stellar sophomore season — as he unleashed 6.5 sacks and 13 QB hits. Corbin K. Smith from All Seahawks outlined how he could be a double-digit sack player if he improves his ability to wrap up opposing quarterbacks. It’s safe to say that Taylor was raw in 2021 with his size and pass-rushing moves, so it should be said that the sky is the limit for Taylor. PFF ranked the Seahawks DL as the worst DL unit in the NFL, so it’s clear that Taylor will need to be the bright spot on the Hawks DL.

The Hawks may not have an elite edge rusher, but they have a strong balance between DE and DT pass-rushing prowess. The new Seahawk Shelby Harris is an athletic DT that can excel as a pass rusher and he showed that in 2021: 6 sacks and 11 QB hits. Harris is flat out one of the most underrated DTs in the NFL.

The Rams NT Greg Gaines had 4.5 sacks and 13 QB hits a season ago — after having 1.5 sacks and 3 QB hits in 2020. PFF awarded Gaines a modest 67.9 grade. AD expressed deep gratitude for Gaines, to say the least. Per PFF Bet, AD stated, “I don’t think there’s no nose tackle in the NFL that’s playing how he’s playing right now.” He Gaines will look to be a hulk-like figure against the run and pass in 2022 — as he strides for a hefty contract extension.

The new Seahawks pass rusher Uchenna Nwosu could be the best-kept secret on the Hawks. After 4.5 sacks and 11 QB hits in 2020, Nwosu had 17 QB hits, 8 TFLs, and 5 sacks last season. Most importantly, he learned to utilize his impressive power as the 2021 season evolved (3 sacks in his past six games). He also made unique plays — as shown below.

The Seahawks chose not to bring back Carlos Dunlap (at least not yet), so it will be imperative that Nwosu has a career season across from Taylor in 2022.

The Cardinals DL Zach Allen, also known as the son of Jared Allen, put together his best season in 2021 (4 sacks, 14 QB hits, and 1 interception) — after having two sacks and six QB hits in 2020. He also flashed his athleticism as he returned a fumble for a touchdown. He notably had two sacks against Trey Lance in last October’s match-up. Allen will really strive to shine in his contract season on the Jones-less defense.

The former Lions DT A’Shawn Robinson is recognized as a mean run-stopper, but he is capable of hurting opposing QBs in the passing game. Besides Robinson recording 67 combined tackles and 2 FF in 2021, Robinson had a few sacks. PFF granted him a 72.5 grade in 2021. He is perhaps the Rams FA in 2023, so it’s clear that McVay will need to prioritize a new contract for the Rams DT.