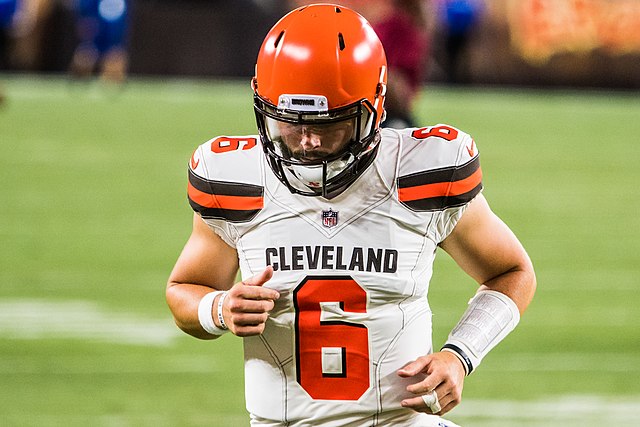 The reflection of Baker Mayfield as a Cleveland Brown

Baker Mayfield won the Heisman Trophy in 2017 as the Quarterback of the Oklahoma Sooners, an award which is given to the most outstanding player in College Football. Going into the 2018 Draft he was the most successful quarterback ever in College Football in terms of his passing efficiency rating (which was 198.9) and he still ranks 6th today.

He was drafted by the Cleveland Browns with the No. 1 pick in the 2018 Draft, a selection that came with extremely high expectations by most Browns fans who thought that at last, they had their QB who would lead them to glory. Baker Mayfield was certainly up to the challenge saying “I think if anybody’s going to turn that franchise around it would be me.” When asked why he’s the right man he said “Accuracy. I can make any throw.” Given his passing efficiency rating, he was right to be so confident.

Baker joined an extremely dysfunctional organization. Hue Jackson was the Head Coach and Todd Hayley was the Offensive coordinator. Over the last two seasons, the Browns had won 1 game, with only 4 wins in the last 3 seasons.

Since their return in 1999, they had only 2 winning seasons, the last in 2007, and the Browns had become the laughing stock of the NFL, a name synonymous with losing. Yet the Cleveland Browns had once been the greatest franchise and are proud owners of 8 Championships, with some of the best NFL players of all time having played for them such as Jim Brown and Otto Graham. Baker was the Browns 30th starting Quarterback since 1999 and he had a tough task ahead of him. The program Hard Knocks highlighted very clearly the incompetence and arrogance of Hue Jackson and the infighting between the Coaches.

By Game 3 of the 2018 season, the Browns were in their usual run of form and were losing to the New York Jets 14-0 in Cleveland. Baker came on to thunderous applause and promptly led the Browns to a 21-17 victory, their first win in 19 games, completing 17 of 23 passes for 201 passing yards. Let’s remind ourselves of Baker Mayfield’s successes in Cleveland:

Baker’s overall NFL stats were a TD-Int ratio of 92-56, 14,125 passing yards, 61.6% accuracy, and an 87.8 passer rating. These stats do not reflect the adversity he had to fight against throughout his time at the Cleveland Browns:

Despite all this, the Browns won 8 games with 5 losses and 5 points or less. They beat the Super Bowl Bengals twice including a 41-16 blowout. On January 11th Andrew Berry said, “We fully expect Baker to be our starter and bounce back.” On March 15th he was meeting with Deshaun Watson and Baker’s time with the Cleveland Browns was effectively over. Baker Mayfield achieved a lot in Cleveland, despite all that was aligned against him. He led the franchise through a turbulent and transitional period and I believe that wherever he ends up he will lead that franchise to much success.