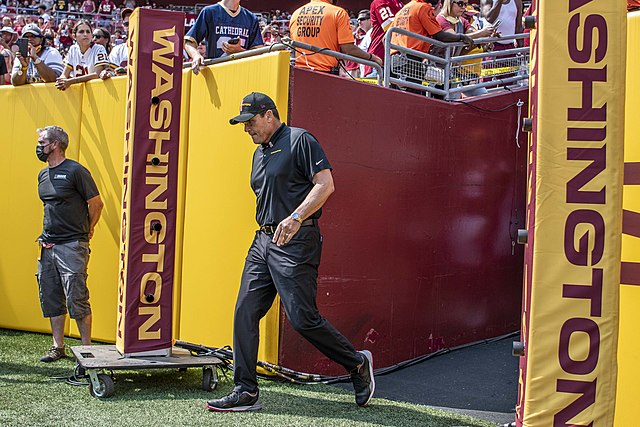 Is John Harbaugh on the hot seat?

The NFL stands for “not for long” and it isn’t easy for any NFL profile to remain a consistent force in the professional football league over a long duration of time. In particular, there are countless NFL head coaches that meet the grim reaper and get fired at the end of each NFL season. With that said, I’m going to outline many coaching faces that are standing on hot coals entering the 2022 NFL season.

The Carolina Panthers axed Joe Brady after they started 5-7 last season and it’s clear they expect progress from their quarterback and offense in 2022. I’m really not convinced that the Panthers and Matt Rhule have improved their QB situation (contrary to Sam Darnold’s self-reflection on Barstool) this offseason. I don’t believe that Sam Darnold or any of the 2022 rookie signal-callers will prevent Rhule from facing the music (such as “Bad Romance” by Lady Gaga).

The Cleveland Browns head coach Kevin Stefanski clearly has high expectations for the second season in a row. Stefanski led the most disappointing team in 2021 and he will face a dire reality if the Browns fail to make the playoffs with an improved 2022 roster. The Deshaun Watson featured Browns might even receive familiar faces in Jadeveon Clowney and OBJ. It’s safe to say that the 2020 coach of the year won’t be “paid to lose games” and he will likely meet the chopping block if his team finishes with 7 or fewer wins for the second season in a row.

The Washington Commanders were desperate for an attractive QB mate at the dance this offseason. Unfortunately, the Commanders weren’t able to acquire Patrick Mahomes or any other elite QB. Ron Rivera is really relying on Carson Wentz to have a career revival and become a modest starting QB. Wentz will most likely not follow in Aaron Rodgers’s old path by ascending from an underperforming QB to an MVP-caliber QB, but he can save his head coach’s future by helping his team make the playoffs for the “second time in three seasons”.

The GOAT Tom Brady almost passed the torch to Lamar Jackson, but the NFL world still knows LJ is a special athlete. The Ravens HC-QB combination needs to find a way to return to the AFC playoff gauntlet in the gutsy AFC North. The Super Bowl XLVII magic is wearing off John Harbaugh and he needs to prove his vision with a Lamar Jackson-led squad. The Steelers legendary head coach Mike Tomlin found a way to dig deep and bring the Steelers to the post-season last season and now it’s time for Harbaugh to keep a chip on his shoulder and discover at least a playoff berth next season.