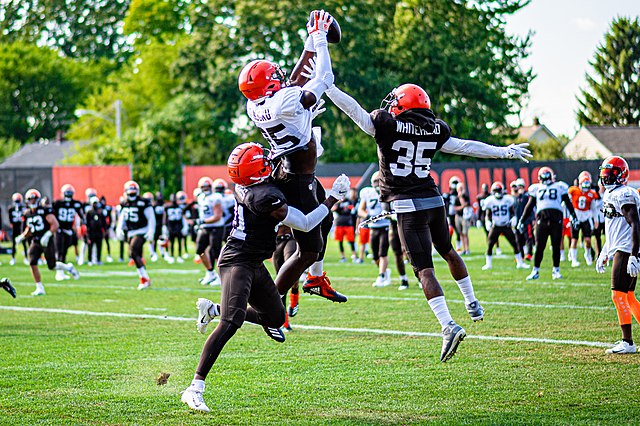 The Cleveland Browns have had a very good postseason on offense, adding QB Deshaun Watson and WR Amari Cooper in free agency and drafting WR David Bell, K Cade York, RB Jerome Ford & WR Michael Woods II. Watson and Cooper upgrade the Offense in key positions and David Bell is known to have been a big Draft target of HC Kevin Stefanski who believes he is a special talent. However, given the current roster the Browns WR2 is currently Donovan Peoples-Jones, who hasn’t put up WR2 statistics to date, so why haven’t the Browns added another veteran wide receiver in free agency? Assuming they don’t add a veteran this can only be for a few key reasons:

Njoku has just signed a 4 year contract extension worth $56.75 million with $28 million guaranteed making him the 5th highest-paid TE in the NFL. The Browns clearly intend to utilize him a lot more than they have in the past. So far he has recorded only 15 touchdowns and 1,754 yards since 2017 which isn’t spectacular. Amongst TEs he was only 24th in receptions last year. He does have the potential to be great with yards per reception over 11+ for the last 3 seasons and a very good catch % of 67.9% last season, with a PFF receiving grade of 70.0. Given his lack of significant production so far the Browns must be planning to target Njoku a lot more in 2022 and expect a big improvement in his numbers. The scheme the Browns run certainly will suit Njoku and with a 6.4 frame, he will make an excellent Red Zone threat. With Harrison Bryant as TE2, the Browns have a very good backup, as last season he gained 11.1 yards per target, 233 yards, and had a catch % of 75%. The Browns Tight End Room could and must be used more effectively in 2022.

The Browns have arguably the best RB Room in the NFL with Nick Chubb, Kareem Hunt, D’Ernest Johnson, Demetric Felton, and Jerome Ford. Not all of these will make the 53-man roster, and personally, I wouldn’t be surprised to see a trade before the start of the season, but these RBs are sitting behind one of the best Offensive Lines in the NFL, if not the No.1 OL in the NFL. Chubb has run for 1000+ yards a season for the last 3 years, with an average per run of 5.3 yards and an average per game of 83 yards with 36 touchdowns. Kareem Hunt averaged 4.9 yards per carry last season with 28 career touchdowns. Hunt is also a receiving threat with 7.9 yards per reception and a catch % of 81%. D’Ernest Johnson really proved his rushing threat last season when Hunt was injured notching up 5.3 yards per carry and 534 yards. The Browns are a running threat and really need to utilize this weapon if they aren’t going to invest further in the Wide Receiver Room. Sometimes it’s seemed to Browns fans that Stefanski has been too quick to drop the run game, so this must become a more consistent and persistent staple of the Browns attack next season.

The Browns Front Office may actually believe the Wide Receiver Room is good enough. Amari Cooper is a clear WR1 and acknowledged as one of the best route runners in the NFL. He will be targeted the most and will be expected to put up big numbers. In 2021 he made 865 yards, with 12.7 yards per reception and 8 touchdowns, but he was under-utilized with only 68 receptions so expect these numbers to be much higher next season. Last season Donovan Peoples-Jones got 3 touchdowns, 597 yards, 17.6 yards per reception, with 34 receptions, but was only targeted 58 times. As WR2 these targets and receptions will increase so you can realistically expect his touchdowns and yardage to increase too. Maybe the Cooper-DPJ 1 & 2 isn’t such a bad idea after all? If David Bell is as good as the Browns Front Office believes him to be and with Schwartz 4.27 40 yard speed running around the edge and Isaiah Weston developing into the athletic freak his data suggests he’s going to be, the Browns could have a very young and very athletic Wide Receiver Room.

A lot of if’s there but, it’s the Browns coaches who are watching the development of these players and it could be that what they are seeing convinces them that they have enough, combined with their tight ends and running backs, to be a very dangerous offensive threat next season with Deshaun Watson at the helm.