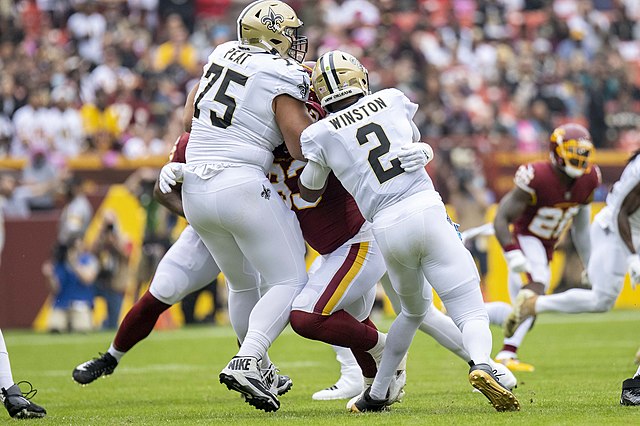 Who is the most overrated player on the Saints?

The New Orleans Saints have ascended into a popular bandwagon team this off-season. I don’t believe that the Saints ability to win a championship with Jameis Winston is a foolish thought, but I do reconcile that there are many profiles on the Saints that don’t deserve a lot of hype. With that said, I’m going to simply outline three overrated players on the Saints at this moment.

The former Stanford offensive lineman that impressed Sean Payton with his quickness in his draft process hasn’t lived up to his five-year extension worth $57 million. He scored a 52.1 PFF grade last season while missing 10 games. After the Saints were unable to retain the talented Terron Armstead at the key LT position, they realized Peat’s hefty contract on the offensive front may not have been the best idea. On the bright side, Peat did play in 13+ games in 2018 (Pro Bowl selection) and 2020 (Pro Bowl selection), so the 28-year-old could stay healthy and be due for a Pro Bowl season in 2022.

It would be an understatement to say that Zack Baun hasn’t lived up to expectations in his Saints tenure thus far. After the Saints traded up to select him in the third round of the 2020 NFL Draft, he has barely touched the field in his two seasons. He simply has 42 combined tackles and 0 sacks in his career. The 2022 season will tell whether the amped-up special teams player can be trusted as a quality LB for the long-term.

Marquez Callaway hasn’t quite lived up to his 2021 pre-season performance against Jacksonville. The scrappy and talented UDFA WR can potentially grow into becoming a WR3 (or maybe WR2) on a team not in the Big Easy. The Saints have a healthy Michael Thomas, gifted rookie Chris Olave, and they even brought Jarvis Landry back home this off-season. After the Top-3 Saints WRs, I expect the elusive and special teams star Deonte Harty to be involved with Callaway for screens and long bombs on occasion. I fully expect him to take a significant drop-off from his 698 yard and 6 touchdown campaign last season.