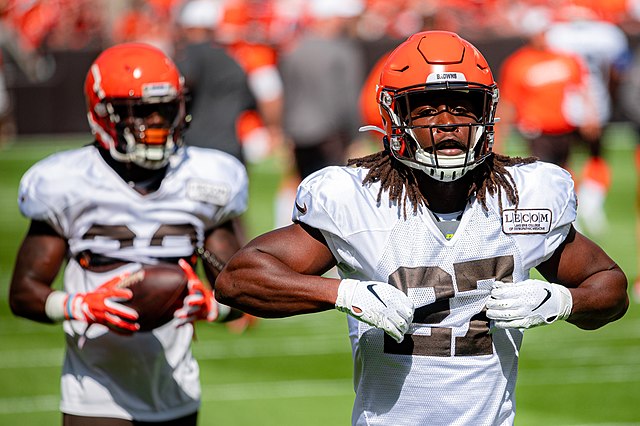 The Cleveland Browns have just re-signed running back D’Ernest Johnson on a 1 year deal worth $2.43 million with $900K in guarantees. The Browns currently have six running backs on their roster with Chubb, Hunt, Johnson, Ford, Felton, and Stanton. The biggest factor in the decision to keep Johnson: Kareem Hunt missed 9 games last season and the Browns relied on Johnson as his replacement who played in all 17 games.

Johnson had 100 carries for 534 yards with 3 touchdowns. He achieved 5.3 yards per carry with an average of 31.4 per game. His PFF rushing grade was an outstanding 90.6. He is a reliable back at catching with 19 receptions for 137 yards, 7.2 yards per reception with a catch percentage of 76.0%. He clearly shined with his plethora of opportunities last season.

The Browns are likely to keep 4 running backs on their roster and we have to assume that Johnny Stanton is headed for the Practice squad. They are very unlikely going to place their new draft pick Jerome Ford on the Practise Squad as he will get signed by another team, and Ford has clearly been drafted as the replacement for either Hunt or Johnson. For me, Chubb and Ford are two locks in the Browns Running Back Room leaving two spots between Hunt, Johnson, and Felton.

Demetric Felton is cheap and he did well with limited carries as a running back, but is also very versatile as a kick/punt returner/special teams player and a wide receiver. He had only 7 carries as a running back for 24 yards with 3.4 yards per attempt and a PFF grade of 62.5. As a receiver he did very well, with 181 yards on 18 receptions with 2 touchdowns and a PFF grade of 78.4. He made 227 yards on punt returns with 7.1 yards/return and 172 yards on kick returns with 19.1 yards/return. It could well be that Felton is used as running back and a receiver now that Jakeem Grant Sr will be the primary punt/kick returner. Cooper, DPJ, Bell, Weston, Schwartz, and Felton could be the WR Room. If Michael Woods II comes good Felton could be moved to the RB Room.

In the near future, the Browns might get an offer for Kareem Hunt from a team that suddenly finds itself in need of a star running back due to an unexpected injury. In which case the Browns have sufficient depth in their roster to trade Hunt for a player and an early-round draft pick, which they’ll likely accept given that Hunt is gone the following season anyway.