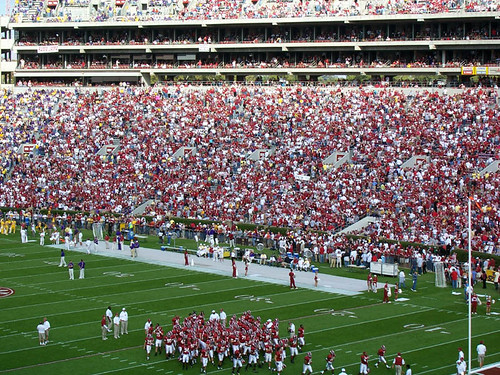 "Alabama takes the field" by James Willamor is licensed under CC BY-SA 2.0

January 8, 2018. The day when the legend of Devonta Smith was born, hurtling through the universe on a ball of fire and spectacularly crashing through the roof of the Mercedes-Benz Superdome in a moment that would send ripples through the football landscape.

A second and 26 overtime prayer turned national championship highlight would create legacies. On one play, a deep-ball dime caught in stride at the goal line, the Alabama Crimson Tide were able to topple their newest challenger to their never-ending dynasty, the Georgia Bulldogs, and in comeback fashion no less. They were able to reassert themselves as the unquestioned rulers of college football.

In doing so, a freshman Tua Tagovailoa worked his way into the hearts of Crimson Tide fans across the state of Alabama, and into the minds of NFL scouts across the country, going from Jalen Hurts’ promising young backup to a championship-winning star quarterback in a moments notice. For Hurts, this game would redefine his legacy as well, getting benched in favor of Tagovailoa in 2018, only to rewrite the script by transferring to the Oklahoma Sooners in 2019, leading to a second-place finish for the Heisman trophy, as well as a second-round selection in the 2020 NFL Draft.

But for all the legacy-altering ramifications set in motion from just one play, perhaps none were greater than what happened for Devonta Smith, the man who ended up catching that game-winning pass. If you didn’t notice the scrawny Crimson Tide backup in his eight-catch freshman season before that play, you certainly did now. And Smith would spend the next three years of his college career making sure you remembered.

Just a few season’s time would see that scrawny Alabama backup turn into the scrawny Alabama superstar, one that used the momentum of his freshman moment in the spotlight to turn into college football’s best player. Smith’s senior season in 2020 ended with a Heisman trophy after a Herculean effort with the Crimson Tide. His 23 touchdown catches were an FBS high, his 117 receptions were an FBS high by more than 30, and his 1,856 receiving yards were an FBS high by more than 600. He was a runaway for college football’s most prestigious individual award, and became the first wide receiver to be named a Heisman winner since 1991.

Nearly three decades separate Smith’s accomplishment from his last counterpart, Michigan’s Desmond Howard. He got there through unparalleled production from an unrivaled skillset. And yet, Smith wasn’t the first player taken in the 2021 NFL Draft. He wasn’t the first pass-catcher off the board, nor the first receiver. Smith wasn’t even the first receiver taken from his own college team. That honor goes to Jaylen Waddle, picked sixth by the Miami Dolphins to Smith’s 10th overall selection by the Philadelphia Eagles.

College production isn’t necessarily a determiner of success in the NFL– but skillset has never been the question regarding Smith. Four years of college tape shows just how explosive he is off the line of scrimmage, how polished a route runner he is, how he combines the best elements of a burner who can take the top off a defense and a possession receiver that can catch every pass in his area. Smith’s talent is not why three pass catchers went before him. If skill were the only factor, Smith’s resume would be untouchable.

Rather, it was size that kept Smith from going to any of the nine teams picking before he was selected. Devonta Smith weighed in at 166 lbs. at the Medical Combine, well below the 203 lbs. average weight of the NFL receiver. As Smith was examined further under the unbelievably-scrutinizing lens of the NFL Draft, questions of his durability at the pro level began to form. Some NFL teams began to wonder whether or not Smith’s talent was worth rolling the dice on with concerns about his durability beginning to control the narrative.

What Devonta Smith does well

When the Eagles traded up to draft Devonta Smith, they brought a man who does it all to Philadelphia to fill a desperate team need. After their previous four draft classes saw the franchise select a total of five wide receivers, two of which were picked in the first two rounds of their respective classes, the Eagles are hoping that Smith provides better luck than that group of five that has combined for a total of just 88 catches and 1,274 yards for the franchise.

For comparison, Justin Jefferson, who was selected one pick after the Eagles drafted a first-round receiver in 2020, finished his rookie season with 88 catches and 1,400 yards of his own. But with Devonta Smith, the Eagles won’t be adding just another developmental player with one defining trait. Rather, drafting Smith will give Philadelphia a receiver who used a variety of elite skills to dominate college football in 2020.

Coming into the 2021 NFL Draft, Smith was leaving behind a legacy with the Alabama Crimson tide unrivaled by anyone before him. His 235 career receptions, 3,965 receiving yards, and 46 touchdowns were all good enough for first place on the all-time Alabama leaderboards, a school that saw receiving talents like Jerry Jeudy, Henry Ruggs, Amari Cooper, and Julio Jones all take the field before him.

What led to Smith catapulting above the NFL first-round picks before him was a playing style that emulates the best traits from each of those players. What defined Jerry Jeudy and Amari Cooper coming out of college was their elite route-running ability, which Smith has shown plenty of through his four college years.

It’s not the highlight-reel cuts or ankle-breaking moves that make Smith such a nightmare to stick with in coverage, but rather, it’s the general mastery of the craft that the receiver possesses, showing it in the subtlety of his movement and the ease of his release off the line of scrimmage. Time after time, and particularly as a senior, Smith showed an ability to beat defenders with quick-moving feet, an immediate release into the route, and the subtle art of eye contact, staring his defenders down rather than turning his head where the route was going to progress, not cluing them in on where he was going next.

Henry Ruggs’ unmistakable trait in college was his track-star speed. At the 2020 NFL Combine, Ruggs ran a 4.27 second 40-yard dash, the fastest time of anyone that year, tied for the sixth-fastest time in the history of the event. And, no, Smith does not have 4.2 speed. But that doesn’t mean he doesn’t play faster than just about anyone on the field.

When Smith wasn’t beating cornerbacks with his refined route-running talent, he could be found blowing directly past them with straight-line speed. The quickness of Smith shows in how the Crimson Tide featured him on offense as well. In the 2020 National Championship against Ohio State, five of Smith’s 12 first-half catches came on screen passes behind the line of scrimmage. Three of those five were for first downs, two of which were gains over 10 yards, while the other two resulted in goal line touchdowns.

It was a similar story in the College Football Playoff game before the match against Ohio State. Two of Smith’s seven Rose Bowl catches against Notre Dame were caught behind the line and turned into gains over 20 yards, one of which went for a touchdown.

Of course, with three Alabama offensive linemen being taken in the 2021 NFL Draft, the Crimson Tide made a habit of impeccable blocking– but Smith’s dominance on quick catch-and-run passes was more than simply Alex Leatherwood and Deonte Brown mowing defenders down. This was the Alabama offense recognizing that Smith, with a head of steam and the ball in his hands, is a big play waiting to happen.

Cooper and Jeudy were route-running specialists, Ruggs was a speed guy, but the book Julio Jones in college was that he was a guy that did just about everything well. You could say the same for Devonta Smith as well.

Smith is a speedy guy with the hands of an elite possession receiver. Time and time again with the Alabama offense, Smith could be seen making acrobatic, contested catches, with two hands or one, being a safety valve to the level where you would be hard-pressed to find a drop on his film.

Smith is an elite college route runner with the sideline awareness to match. What made those acrobatic catches even more special is that oftentimes they came at the boundary of the field. In 2020 especially, Smith displayed an ability to track down the ball, reel it in through contact and coverage, and get a foot (sometimes even two) down in bounds.

Smith is everything you could daydream about in a receiver prospect. His raw traits are among the best in the class, but his understanding of the game and refined style of play is what sets him apart. There is, however, one thing about Smith that draws red flags.

Size, Durability, and the Randomness of Injury

It’s a positive when you can come in as a prospect with just one defined weakness, but when that weakness is in your ability to stay on the field, it could mean that all the talent you possess in other aspects of the game are wasted in the medical tent.

So when Smith came in below 170 lbs, it became a talking point, and a concern for some NFL franchises. For as undeniably gifted as Smith is, football is an unforgivably brutal sport. Can Smith’s physical build allow him to stay on the field for the Eagles?

Injury concerns are real, but they haven’t been present in Smith’s career up to this point. In fact, in four seasons with the Crimson Tide, Smith had missed just two games with an injury— and hasn’t missed a game since 2018.

The NFL is a more physical league than college, where only the biggest, fastest, and strongest are selected to play, but Smith has been playing against future NFL defenders since he first got to Alabama. Against South Carolina, Smith was forced to line up against Jaycee Horn, who was selected two picks before Smith in 2021.

He’s faced Noah Igbinoghene from Auburn, Tyson Campbell from Georgia, Shaun Wade from Ohio State, all of whom now play on NFL rosters. He’s spent his entire college career in the SEC, a conference that has produced 21 first-round defensive draft picks over the last four seasons. And nearly every time one of those players hit Smith, he popped right back up, ready for the next down.

Being a bigger receiver does not make you immune to injuries. Michael Thomas, Julio Jones, and Davante Adams, three stars all over the average weight of 203 lbs. for NFL receivers, all missed multiple games in 2020 due to injury, while receivers below the weight line like Brandin Cooks and Emmanuel Sanders played healthy in the 2020 season.

Of course, both Sanders and Cooks have a prior history of injury. But the issues suffered by Jones and Thomas illustrate an important point– that the injury bug can come for anyone, regardless of size. In fact, it struck Devonta Smith’s teammate and the sixth overall pick in 2021, Jaylen Waddle, who missed eight games on the year due to a high ankle sprain and fracture.

The Safest Pick in the Draft

Devonta Smith is seen as a gamble. A high-risk, high-reward player that can either be the best player on the field or the best player watching in street clothes from the sideline. At least, that’s the perception.

He has the raw talent to fit into an NFL roster from Day One, and be the best player immediately on a depleted Eagles’ wide receiver depth chart. He has the refined skill and football knowledge to build on that talent as well. Devonta Smith has everything he needs to blossom into one of the best young receivers in the game, all in a slender body that hasn’t sustained a serious midseason injury in over two seasons.