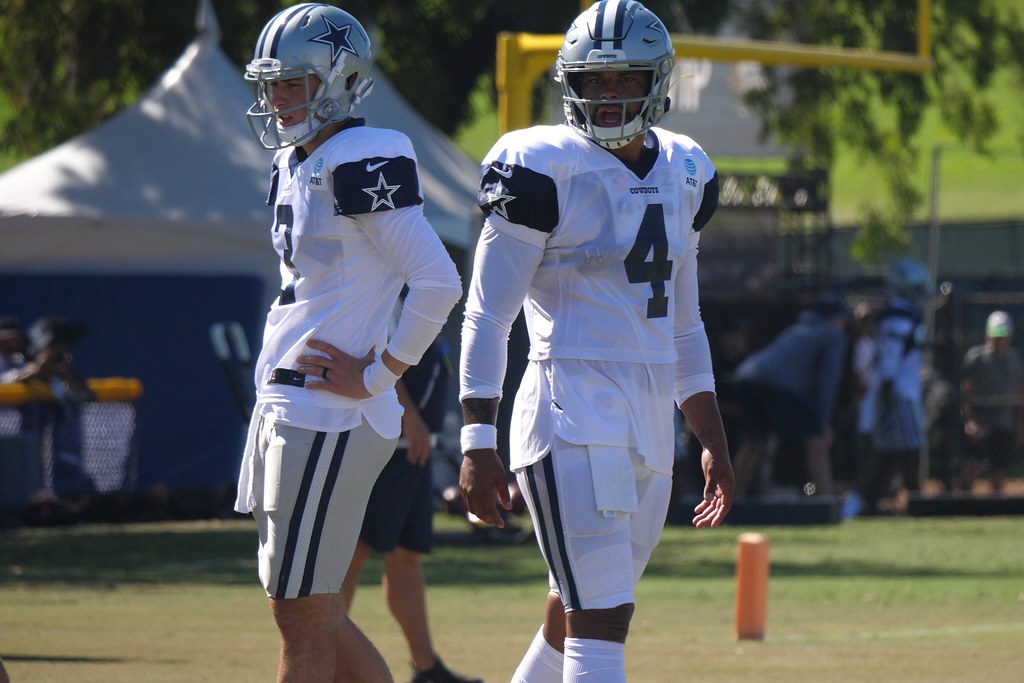 The Dallas Cowboys just signed quarterback Dak Prescott to a four year deal worth up to $164 million. He also has a no-trade clause and the guaranteed money is at $126 million.

Even with all the money they have tied up in Prescott, it is very important for the Cowboys to have a good backup quarterback. Last season, Prescott got injured in Week 5 against the New York Giants and was lost for the season.

After Prescott went down, the Cowboys had a trio of quarterbacks take over. Andy Dalton, Ben DiNucci and Garrett Gilbert combined to start 11 games and they went a combined 4 – 7. With more consistency from the backup quarterback spot, if Prescott gets hurt again, the Cowboys will be able to be more even keeled.

With Prescott in last season, he was putting up amazing numbers but the Cowboys were only 2 – 3 with him as the starter. The Cowboys need a lot of help, especially on defense to help withstand an injury to Prescott.

Here are three quarterbacks who could backup Prescott and the season wouldn’t be totally lost if they need to play a few games.

Andy Dalton was the first guy up last season when Prescott went down. He also dealt with injuries and being placed on the COVID list last season, which is why DiNucci and Gilbert saw playing time.

The biggest advantage for the Cowboys to run it back with Dalton is that he knows the system as he was there last season. While the final result wasn’t what the Cowboys wanted, Dalton had some impressive games. Here are some statistics from last season to give a more in-depth look at how Dalton played:

Dalton is no longer in a position to be a full-time starter but could be extremely valuable as Prescott’s backup.

Jacoby Brissett is entering his sixth season in the NFL. During his first five years, he has had the opportunity to start for two seasons and has been a backup to Tom Brady, Andrew Luck and Phillip Rivers in the other three. In the two seasons he has started, he has completed almost 60% of his passes for over 6,000 yards with 31 touchdown passes and 13 interceptions.

In the last two seasons with the Indianapolis Colts, he has been used very effectively as a runner. He has 73 rushing attempts in which he has scored seven touchdowns and has gotten a first down 29 times.

In Mike McCarthy’s offense, the quarterback is typically at least somewhat mobile. Most notably, when he was with Alex Smith in San Francisco and Aaron Rodgers in Green Bay, the quarterbacks were able to extend plays due to their legs. Adding Brissett, who can run, as a backup to Prescott, who hopefully will be fully recovered from his ankle injury, is a good move to make.

In 2020 Alex Smith started six games for the Washington Football Team after dealing with a life-threatening injury that caused him to miss the entirety of the 2019 season. His good play helped Washington go 5 – 1 in his starts and they made the playoffs. Smith was named the Comeback Player of the Year before being released.

Following his release, many have speculated that Smith would sign with the Jacksonville Jaguars to be reunited with his college head coach, Urban Meyer. Additionally, as the Jaguars have the first overall pick and are expected to pick Clemson quarterback Trevor Lawrence, Smith would be a great asset to the Jaguars, as a backup to Lawrence and possibly even the starter to start the season, if they feel it’s prudent for Lawrence to sit a little bit.

Perhaps, instead of reuniting with his college coach, maybe Smith would like to be reunited with his first NFL offensive coordinator, Mike McCarthy, who is the current head coach for the Dallas Cowboys.

Smith is well-liked and respected in the quarterback rooms he’s been in. Younger quarterbacks have gained so much from him that he would not only help Dak Prescott but if the Cowboys bring back DiNucci or Gilbert, who are both currently under contract, he can be helpful to them as well.

Smith is likely to look for an opportunity to start. However, there aren’t many teams looking for a starter that would be going after an almost 37-year-old quarterback. That’s why Dallas makes a lot of sense.

One last point about Smith needs to be made. While he definitely comes across as a “team first” guy and is well-liked, if Smith is unhappy with how he was treated by Washington, signing with their rivals, the Cowboys is a great way to stick it to them.

Two players mentioned a few times in this article, Ben DiNucci and Garrett Gilbert are also options. However, if either one of them is the backup to Prescott, the Cowboys have no chance to contend. Either of these quarterbacks would be a solid third quarterback to sit and learn.

Especially if the Cowboys go with one of the older options for the backup quarterback, having DiNucci or Gilbert learn how to be a professional quarterback from them would be very helpful. Both are still young enough to one day become a reliable backup option but they need some time.