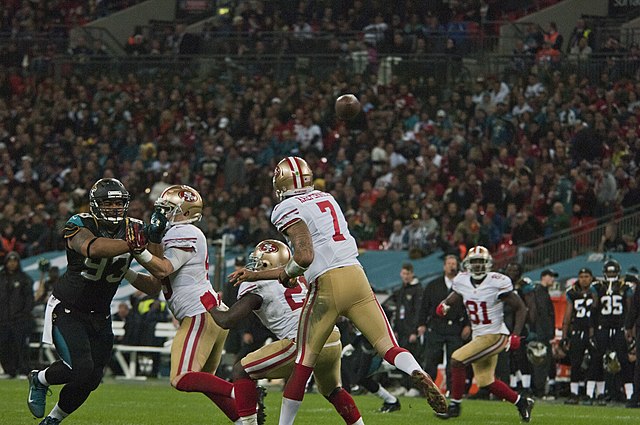 The Carolina Panthers have been lobbying for a new, talented quarterback to join their squad this offseason. Matt Rhule clearly wasn’t able to acquire Deshaun Watson or Russell Wilson. I expect CAR to not draft a QB early in the 2022 NFL draft. Nonetheless, they can still find a diamond in the rough in the free-agent QB pool.

Matter of fact, I believe there is one QB that would be a perfect fit for the Panthers: Colin Kaepernick.

Kap would essentially be an upgrade over Cam Newton in my mind. They both hold a similar skillset, but Kap is more explosive and he arguably has better arm talent right now. In 2016 (his last season in the league), he registered 16 passing touchdowns, 4 interceptions, and averaged 6.8 yards per attempt. He also showed his arm strength and arm ability on the run quite well at the Big House recently.

Meanwhile, Cam Newton threw 4 touchdowns, 5 interceptions, and unveiled a career-low 5.4 YPC last season. Newton might have familiarity and respect amid Panthers nation, but I believe Kap can really be more productive for the Panthers in 2022.

Kap is 34 years old, but he has fresh legs and he has kept in shape. Andy Dalton is 34 years old and he just signed a contract with the Saints. Furthermore, Matt Ryan is 36 years old and he could likely play five more seasons with the Colts. The dual-threat QB Michael Vick was a New York Jets at age 34, as well. I don’t believe that Kap is washed up right now and he could be a threat in the NFL for a couple more seasons. Interestingly, Kap can be dangerous as a rotational QB with his speed, too. If Sam Darnold is the best starting option in Week 1, Rhule can still find ways to get Kap (4.53 40 yard dash at the NFL combine) involved.

I also believe that Kap is the best free-agent QB option for the Panthers. Here is a closer look at the other free agent signal-callers:

If the Panthers are seeking a versatile, cheaper free agent QB with the highest ceiling, they should ink Kap and give him the keys at QB1 or make sure he’s a vital piece of their puzzle as QB2.