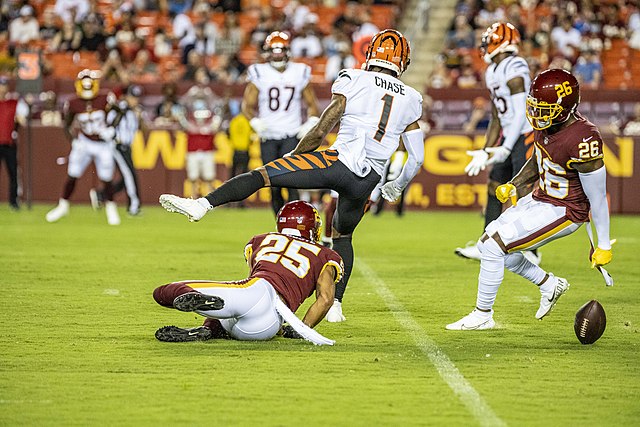 What is the ceiling and floor of the Cincinnati Bengals?

The Cincinnati Bengals’ 2021 season was phenomenal. They could have been Super Bowl champions for the first time ever. While they lost to the Los Angeles Rams, they will believe they can make the Super Bowl again. But what is the ceiling and the floor of the Bengals in 2022?

Last season we saw the Bengals become the underdogs as they were the team every AFC team underestimated; they are clearly not that anymore. Joe Burrow is one of the great quarterbacks and wide receiver Ja’Marr Chase is an offensive threat.

With those two alone, this puts the Bengals in a position for long term success. They can flourish in the future and have a talented defence with the third-highest cap space and an abundance of draft picks. It is one of the most valuable building blocks in the NFL, and why their ceiling next year can be consecutive appearances in the Super Bowl.

However, there are issues and among those issues is the most apparent one of all, the offensive line. The Rams sacked Burrow seven times, tying the Super Bowl record. A problem was the Rams showed what a weak offensive line they had, something on which they must improve.

Another issue to solve is the short passing game. The Bengals are great with long passes. However, the short passing needs improvement. A wide receiver that performs short pass plays improves this. Chase then has an advantage where he can punish opponents. Furthermore, Joe Mixon will have more space on the ground to find additional yards.

The offensive line has revamped with the Bengals signing La’el Collins in addition to RG Alex Cappa and C Ted Karras. Cincinnati and the front office have addressed its critical problem. Though a good addition, it is imperative that Cincinnati do not cut ties with Collins before the 2024 season as that would result in a significant financial fallout.

The floor sees them finishing second in their division and losing in the Divisional Round. The AFC North will be strong this year. Baltimore Ravens, more importantly, Lamar Jackson, will want to avenge their injury-riddled season last season that saw them miss the playoffs entirely.

With Deshaun Watson at Cleveland, the division sees all teams with talented QBs except the Pittsburgh Steelers. The question becomes will Watson play? He may not, and the Browns can go into Week 4 already playing catch up.

But the reason the Bengals will still be a perennial playoff team is because of Burrow’s ability to elevate his teammates. Reaching a Super Bowl despite being Burrow sacked 70 times. He would easily take a team that has improved their most glaring weakness into the playoff and win their division.

Add to the fact that Chase and Tee Higgins have the upside to be great in the future, coupled with a bright coach in Zac Taylor, and the ceiling is another Super Bowl appearance. Their Worst-case scenario for the Bengals is they still make the playoffs, but this only shows the magnificent turnaround the Bengals have achieved with their franchise QB and Zac Taylor.