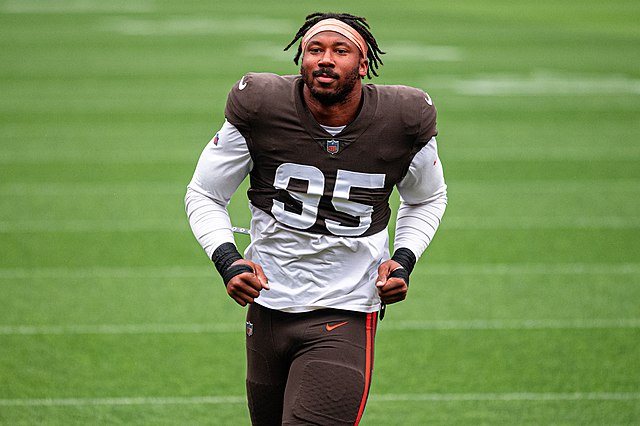 Who is the best AFC North pass rusher?

The AFC North is one of the most competitive NFL divisions and the talent of the edge rusher is a big reason why it’s a loaded division. As the NFL offseason is inching closer to May, I’m going to highlight the behemoth edge rushers that roam the AFC North and even rank the pass rush talent in the AFC North. Let’s begin.

Watt is a gifted centurion that wreaks havoc on the edge and makes plays at the biggest moments. Watt is coming off three straight All-Pro seasons and he won Defensive Player of The Year in 2021. Watt’s 22.5 sacks in 2021 were marvelous, as he tied Michael Strahan’s sack record. He will surely look to break the single-season sack record next season and be the next defender to win two straight DPOY awards.

Myles Garrett didn’t win DPOY last season, but he did was Pro Football Focus’s top tanked DE in 2021. Garrett unleashed 16 sacks in 2021 (12 sacks in 2020). Garrett could witness more offenses playing catch-against against his Deshaun Watson-led team. Garrett and Watt are strong candidates for DPOY next season.

It’s safe to say that Trey Hendrickson has been highly motivated by the Saints 2017 draft class. Alvin Kamara, Marshon Lattimore, Ryan Ramczyk, and Hendrickson were ALL selected in the same class. Hendrickson has been one of the NFL’s top pass rushers over the past two seasons. He’s third in the NFL in sacks since 2020.

The Steelers veteran DT/DE is like fine wine, as he continues to dominate at the late stages of his career. Cameron Heyward unleashed 10 sacks and 89 tackles last season and it’s clear he’s a perfect partner with Watt. It would make sense if Heyward has two-three seasons of quality play left in him.

The Bengals edge rusher Sam Hubbard was a very underrated AFC pass rusher last season. Hubbard recorded 8.5 sacks in 2019, 2.5 sacks in 2020, and then bounced back with 7.5 sacks in 2021. It may seem like the 26 year old DE is due for a career season in the near future.