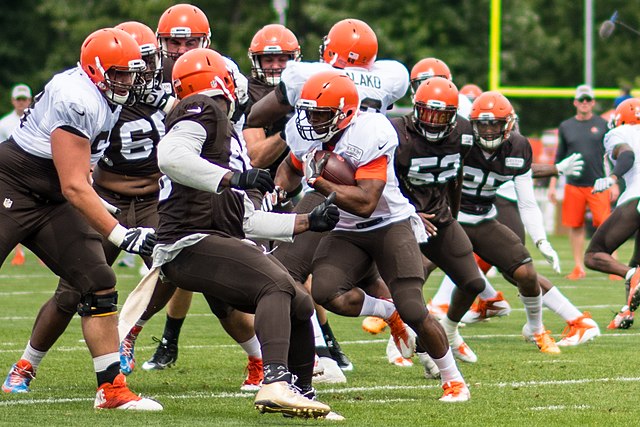 Was the Browns 2022 Draft successful?

The Cleveland Browns entered the 2022 Draft with the following needs: DE, DT, K & WR. They ended up drafting 9 players (4 on Offense, 4 on Defense, and 1 ST). Here’s a list of the players they selected:

After the 7 Rounds, the Browns then selected 12 UDFA including:

The NFL experts grading this Draft seem to have gone for a consensus grade of B+ but Andrew Berry was really pleased with his haul. I think, yet again, he drafted very well selecting players with high upside in key positions and trading down 3 times to get more of them. The Browns have a pretty full roster packed with a lot of talent. Most of these players have been picked to come through to the first team in a couple of years or more, as important rotational players, with 3 likely starting straight away.

The 3 picks Andrew Berry traded down for turned into those 3 likely starters:

In the Defensive End Room, Alex Wright is an archetypal Browns DE and probably fell to 78 because he didn’t test at the Combine. He’s 6.5 271lbs and in 2021 registered 7.5 tackles for loss and 7 sacks, with 3 pass breakups and 2 forced fumbles. PFF graded him the 3rd best DE in College Football so this was another important pick up at a crucial position of need and Wright will be a useful backup next season to Garrett and whoever else the Browns bring in during Free Agency. The Browns added a second DE in Isaiah Thomas who is 6.5 and 266lbs. He’s had 8 sacks a season for the last 2 years, and in 2021 added 11.5 tackles for loss, 4 pass breakups, 34 QB pressures, and 3 forced fumbles. His RAS score is 9.16 which is super athletic. The Browns have added quality depth to a really important position of need. I’m grading this room upgrade as an A.

WR concerns were covered with 2 selections, the better of which is undoubtedly David Bell who is 6.1 and a slightly heavier 212lbs. He was No.1 in contested catches in College football and had 13.8 yards per catch last season with 1,286 yards. He’s not fast, but he’s an excellent route runner both inside and outside and can create separation laterally, and uses his weight to win contested catches. This could mean that Landry isn’t returning as Bell and the Browns TE will be the short to medium range targets. Hopefully, this means the Browns will be after someone else like Will Fuller now the Draft is over. Michael Woods was selected with the pick the Browns received for the Amari Cooper trade and I suspect was selected because he has many of the traits Berry likes- he’s young at 22, he’s very athletic with a RAS score of 7.64 and he’s 6.1, so we’ll see how he progresses. Isaiah Weston is freakishly athletic with a RAS score of 9.99, a 4.42 40-yard dash, and elite measurements in the vertical and broad jumps.  I really think he’s one to watch, but the Browns still need to add a WR post Draft.

The Browns were not expected to select an RB with Chubb, Hunt, Johnson, and Felton already established on the roster, but Jerome Ford is a good choice. 5.10, 210lbs with a 4.46 40-yard dash. In 2021 he had 19 touchdowns, with 52 missed tackles forced, 32 explosive runs, 3 yards after contact per attempt, and a PFF rushing grade of 89.4! Kareem Hunt is on the last year of his contract and D’ernest Johnson is a free agent which no other team opted to take, so is back with the Browns. Jerome Ford is clearly the replacement for someone, and I speculate that Hunt might be used as a bargaining tool in a potential Baker trade.

The Browns had a very good 2022 Draft which will go under the radar as they didn’t pick until Round 3. If they add more quality players, if Deshaun Watson gets a lot of game time, barring injuries, they’ve set themselves up for contention in the AFC North and the AFC Championship.