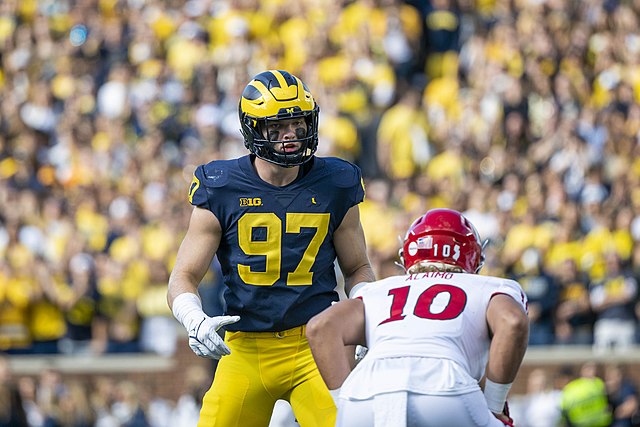 The bright football mind Kyle Brandt expressed on Good Morning Football that the Lions selected the draft’s top player in Aidan Hutchinson with the second overall pick. Of course, the Jacksonville Jaguars felt like Travon Walker was more special than Hutchinson. Nonetheless, the former Michigan Wolverine is arguably more pro-ready than the former Georgia pass rusher and other highly touted rookie defenders. I really feel like Hutchinson, also known as Nick Bosa 2.0, can be a warrior and Pro Bowl-caliber DE in year one as a Detroit Lion. With that said, here are three reasons why the Lions DE can win DROY in 2022.

Hutchinson isn’t only a competitive maniac, but he plays a position where talented rookies usually have a quality floor in year one: edge rusher. In fact, the DE position has showcased the most (three) DROY winners since 2016 (Chase Young, Nick Bosa, and Joey Bosa). It can be a struggle for cornerbacks to be filled with dynamite as a rookie, as only one CB has won DROY since 2016. History has clearly favored the brave DE position for rookie profiles.

As previously stated, I really believe Hutchinson is more prepared to use his skill and motor to be successful on Day 1 than the likes of Walker and Kavyon Thibodeaux. Walker has a rare combination of size and speed (4.51 40-yard dash), but It will certainly take time for him to develop his ability at the professional level. Walker could have a slightly similar path as the New Orleans Saints DE Marcus Davenport, who is coming off a career season in year four of his career.

The Chicago Bears might be one squad, but the Lions divisional foe gave up the most sacks last season. Hutchinson should be licking his chops in each contest against the rebuilding Bears offense. Chase Young had 2.5 sacks against the Eagles in his DROY campaign and it was unveiled to be a big piece of his 7.5 sack puzzle. If Hutch can have a few sacks against the Bears next season, it could honestly be a monster advantage in his chances to win DROY.