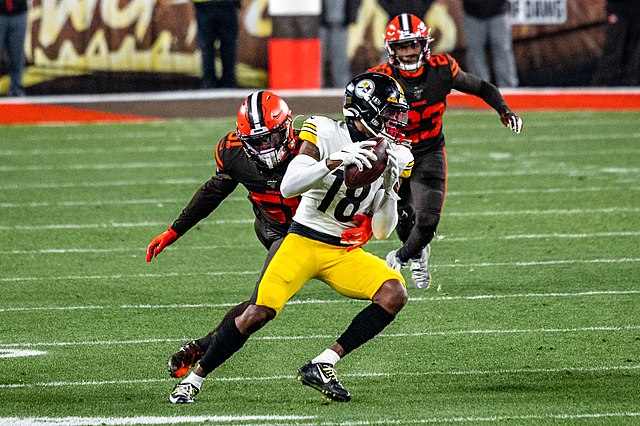 Heading into the 2022 Draft the Steelers had some roster needs to fill. Long-time successful QB Ben Roethlisberger had retired, and although they had acquired Mitchell Trubisky, with Mason Rudolph as backup, there was still the opportunity to get a QB from this year’s Draft. The Steelers needed a replacement for WR Ju-Ju Smith-Schuster, who would complement Chase Claypool and Diontae Johnson. Their Secondary required topping up to replace CB Joe Haden and upgrade S Karl Joseph. They had signed CB Levi Wallace for 2 years on $8 million from the Bills and re-signed Miles Killebrew for 2 years on $4 million, but depth at both positions is very important.

The Offensive Line had been invested in post-season with RG James Daniels signed for 3 years for $26.5 million from Chicago, and Chukwuma Okorafor re-signed for 3 years on $29.25 million. With Centre Mason Cole and RG Kendrick Green as likely backup to Daniels this left a need for an LT in the Draft, as rookie Dan Moore Jr was thrust into that starting role in 2021. The Steelers had done a lot in the off-season pre-Draft to fill holes so we’re really looking at rotational depth players in the key areas of WR, CB, S & LT with investment in the long-term QB position. The defensive line is a strength of the Steelers, but it’s always worth investing in if the right player is available. They had also invested in ILB Myles Jack for 2 years on $16 million who paired with Devin Bush makes their LB core a strong Room.

The Steelers Drafted the following players:

It was no surprise the Steelers picked a QB at 20, and in fact, they had their choice of the QBs available, opting for the one with the highest floor. Kenny Pickett had a really good 2021 leading Pittsburgh to the ACC Championship, with 4,319 passing yards, 42 touchdowns, only 7 interceptions, 241 running yards, and 67.2% completions. He’s a good pocket passer with mobility and has a good OL to develop behind. The main concern is his 8.5-inch hands and his 38 fumbles with Michael Vick and Tony Romo being the only two successful QB with 8.5-inch hands in the NFL. Rather surprisingly, unless they know Rudolph is leaving, the Steelers went QB again in the 7th Round with Oladokun, who had a good year at South Dakota State, with 25 touchdowns and 7 interceptions. He’s known to have good arm talent and pocket mobility so is one to develop on the Practice Squad.

The Steelers met further needs by Drafting two WRs. George Pickens is 6.3 and 195lbs with a 40-yard dash of 4.47 seconds and is a top 25 overall recruit nationally- with an attitude. He tore his ACL in 2021 but did return to play in the final 4 games. He has excellent ball skills and is an outside WR, with route running needing development. Calvin Austin III should be a really useful addition as slot WR to the Steelers WR Room. Although 5.8 and 170lbs, he’s really fast with a 40-yard speed of 4.32 and is a good punt returner.

The AFC North is going to be a really tough Division in 2022 so getting to the postseason will be a challenge. The Steelers Draft filled holes at QB and WR but didn’t touch LT or add Secondary depth at CB or S. With outstanding QBs in the Division, namely Burrow & Watson, and Jackson an inconsistent, but very real threat in passing, the Steelers are going to have to rely upon consistently good performances. They are pretty solid across their roster and in Mike Tomlin, they have an HC who has had 15 consecutive winning seasons, so is the man you want in charge of a transitionary period in Steelers history.  I suspect that QB will be the key difference between the teams next season.