What is the best landing spot for Adrian Peterson?

Adrian Peterson has had a legendary career in the NFL, that much is undoubted.  5th all-time in rushing yards at 14,918, 4th all-time in rushing touchdowns at 120, and 10th all-time in total touchdowns at 126.  There are very few players in the history of the league who have accomplished what AP has done.  However, at 36 years years of age (37 on March 21st), we do not know much about what he could provide to an NFL team.  In this article, I will cover 3 teams that could sign AP for 2022, as well as why they should.

The Giants clearly need someone to handle some of the workload for Saquon Barkley and give him a chance to rest some downs rather than be a workhorse.  With this, the Giants could use Peterson as the Lions did in 2020, to pace D’Andre Swift.  Letting AP run as the primary ball carrier is mostly gone nowadays as his efficiency is not as good.  However, letting him be a change of pace back who can get a few yards and give Barkley a break may not be the worst idea for the New York football Giants.

With Malcolm Brown and Duke Johnson both set to hit free agency, the Dolphins could be looking for another 3rd down back to bring in to complement Myles Gaskin and Phillip Lindsay.  While AP would not be the starter, as mentioned previously, it would be beneficial for him to get snaps as a rotational back and be thrown out onto the field in good scenarios where he can get the first.  Giving a young offense with Tua Tagovailoa and Jaylen Waddle a veteran presence also would not hurt to improve the structure of the team.

Obviously, we all know by now that the Colts have a phenomenal running back in Jonathan Taylor, however giving him a back to take a few snaps and let JT catch his breath may be good for his career.  With many of the premier backs suffering injuries due to overuse as a workhorse in the last few years (Todd Gurley, Alvin Kamara, Dalvin Cook, Christian McCaffrey, etc.) giving Taylor a suitable backup would be helpful to say the least. 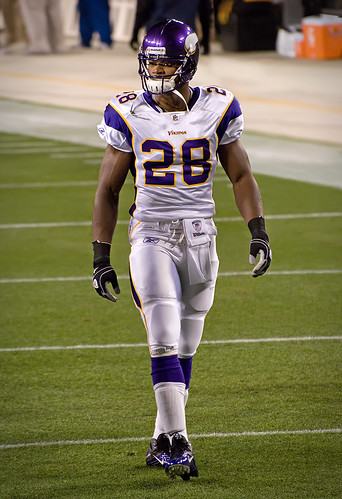 "Adrian Peterson" by Mike Morbeck is licensed under CC BY-SA 2.0

Adrian Peterson has had one of the best running back careers in NFL history. The 4-time First-Team All-Pro, 7-time Pro-Bowler, and future first-ballot Hall of Famer is looking for a new team after spending his 2020 season with the Detroit Lions. Peterson has already stated that he is not only looking to return but he is chasing his 1st ever Championship and going after Emmitt Smith’s Rushing Yards Record which he is 3,535 yards away from.

Peterson is still a low-end starter/high-end backup in the NFL and his veteran presence would be valued in an NFL locker room. Peterson has slowed down throughout the past three seasons.

Adrian Peterson still has juice in the tank. Peterson averaged more yards per carry and notable NFL running backs Todd Gurley (FA), Joe Mixon (CIN), and had the same as Josh Jacobs (LVR). Teams that need an option and are limited by the lowered Salary Cap this offseason should look at Peterson alongside teams who want a veteran option to be a backup for a season.

Boasting the worst rushing offense in the NFL averaging a sad 3.6 yards per carry and 84.4 yards per game (7 yards less than 2nd worst in the NFL). The Pittsburgh Steelers desperately need an upgrade at running back. The only problem is that the Steelers are already above the cap. Signs point to Ben Roethlisberger returning with a contract restructure saving the Steelers some money.

However, that money will have to be used to resign notable players who are becoming free agents such as Bud Dupree (OLB), Alejandro Villanueva (LT), JuJu Smith-Schuster (WR), and Mike Hilton (DB). Pittsburgh likely cannot afford many of the large running back names on the market.

Peterson is an underrated option that they could pair with a back from the 2021 NFL draft. Peterson is too late in his career to change the trajectory of a franchise however he could impact the team more than many running backs on the market with his experience. There is much more wrong with the Steelers on offense than the running back position but there is no doubt that having a strong veteran player in the backfield would benefit the Steelers next season.

The Atlanta Falcons have a mediocre offense since there is little to no balance. Matt Ryan, Julio Jones, Calvin Ridley, and Russell Gage continue to be one of the most explosive passing groups in the NFL. The running game led by Todd Gurley and Brian Hill was miles behind the passing game. Averaging only 95.8 yards per game the Falcons rushing offense was led by Todd Gurley who finished averaging 3.5 yards per carry and with less than 700 yards on the season. Atlanta is in a similar position to Pittsburgh due to the massive $40 million cap hit that Matt Ryan has. The Falcons are currently $12 million over the cap before free agency and the draft. In addition to that, both Todd Gurley and Brian Hill are free agents.

The Falcons will likely draft a running back because of how strapped for cash they are. Adrian Peterson would be a good fit to be a veteran leader in the new-look Falcons running back room while also being able to handle starting duties for several weeks at a time if new coach Arthur Smith needs him too. Arthur Smith comes from Tennessee where he called plays for All-Pro running back Derrick Henry. There is not a running back that is similar to Henry in the NFL however if there is a style of running that emulates what Henry does it is Adrian Peterson.

The New York Giants may be a surprise to some on this list. However, after Saquon Barkley was put on Injured Reserve after suffering ACL and Meniscus injuries in a Week 2 contest against the Bears the New York Giants ran through several different running backs. Wayne Gallman, Alfred Morris, and Devonta Freeman were all underwhelmed for the Giants during weeks 3-17. All three players averaged less than 46 yards per game and led to the Giants being 2nd last in yards per game.

While Barkley returning gives the Giants a massive boost there still should be a concern with the backup role. Peterson could come in as a one-year fix and give the Giants a reliable back behind their star. In addition to the need the Giants have, Peterson and Barkley already have a strong relationship. Barkley leaned on Peterson and his advice before and after he had surgery. Peterson could be an asset as a backup for Barkley and he would cost the veteran minimum which makes Peterson a better value than most of the running backs on the market who have unproven careers.

I would not expect Adrian Peterson to have tons of suitors at the Beginning of free agency. However, because of his potential contract, there are not many teams that would turn down his veteran presence in their locker room. Peterson may wait to sign with a team until training camp to wait and see where other backs land this offseason through the NFL Draft and Free agency. By the time training camp comes around there will be several teams in contact with Peterson in an attempt to sign the future Hall-of-Famer.