Why the Lions really need to draft Kyle Hamilton 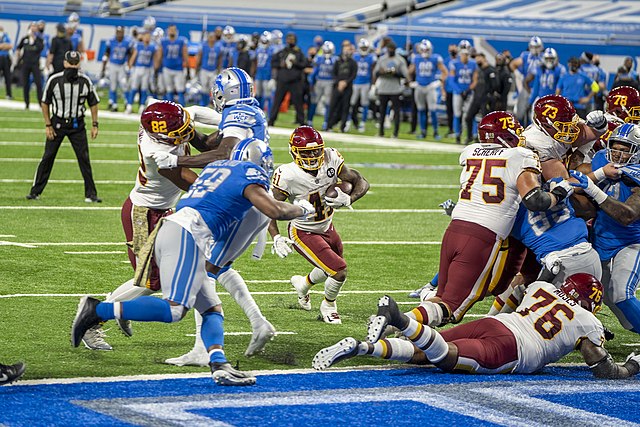 Kyle Hamilton needs to be picked by the Lions

There’s no denying the pure talent and production Kyle Hamilton has. At 6-foot-4, 220 pounds, the former Golden Domer helped Notre Dame get to the College Football Playoffs as a sophomore during a first-team All-ACC season, then was named a Consensus All-American in 2021. In 31 career games, Hamilton piled up eight interceptions and 16 passes defended.

His range and explosion are a rare blend for a player of his size. Hamilton is far and away considered the top defensive back in the class, as he patrols the secondary as a do-it-all safety. Whether it’s coming downhill in the run game, or covering the back end from sideline to sideline, he has a similar skill set and frame to All-Pros Derwin James and Kam Chancellor.

Then he went to the NFL Combine and showed out. The soon-to-be 21-year-old leaped with a 38-inch vertical, measured 10-feet, 11-inches in the broad jump, as well-timed at 6.90 in the three-cone drill and 4.59 in the 40-yard dash. When a player with elite tape couples that with elite physical tools, you have the makings of a can’t miss prospect. Hamilton is a true prototype player and projects as a safety that can move fluidly in many assignments throughout a defensive backfield.

But the issue for Hamilton in this draft class comes down to value; playing a role on the field that is considered lower in positional value (safety), the Notre Dame product is not a lock to go within the top five because of it. A team like the Detroit Lions, however, should at least ponder over bringing in a player who could be a plug-and-play starter and Pro Bowler.

During Dan Campbell’s first year at the helm, the Lions showed progress but ultimately finished at the bottom of the NFC at 3-13-1. Posting the 29th overall defense in the league last season, Detroit also ranked 24th in pass D, tied for the third-most TD passes allowed, and tied for the fifth-least picks in the NFL.

The Lions did have solid safety play from Tracy Walker last season, but he’s set to hit free agency next week. The team’s other starting safety, Will Harris, is still under contract but he is coming off a rough go in 2021 (42.6 PFF grade). So if selected, Hamilton could upgrade the secondary in an immediate fashion.

Detroit has been trying to figure out its secondary for some time now. The Lions traded former All-Pro Darius Slay in 2020, then took Ohio State corner Jeff Okudah with the No. 3 pick that same year. But through two NFL seasons, the former Buckeye has struggled on the field and has only played in 10 games. Even more directly at Hamilton’s position, the Lions also traded safety Quandre Diggs to Seattle in ’20, and he’s picked up two Pro Bowl selections since then.

And let’s be honest, who would you even consider Detroit’s best defensive player? Amani Oruwariye? Alex Anzalone? Trey Flowers? Charles Harris is coming off a 7.5-sack season, but he too will be heading to the free-agent market. The Lions need an absolute difference maker on D and selecting Hamilton could bring in that caliber of player.

It will be a major move if Detroit selects Hamilton at No. 2. The highest a safety has gone in recent years was when the Jets picked Jamal Adams No. 6 overall in 2017, and the last to go top five was Eric Berry in 2010. And historically, only two others (Eric Turner at No. 3 in 1991, Sean Taylor at No. 5 in 2004) have gone in the top five. Those are some great names to be in conversation with, and Hamilton deserves to be in the same breath as them as the next great safety prospect.

There could be a push to add edge rushers, Aidan Hutchinson or Kayvon Thibodeaux, especially for the former as a Michigan native that dominated just 45 minutes away in Ann Arbor as a Wolverine last fall. And I’m sure as a former tight end Campbell would love to add a presence in the trenches. But Hamilton, in my opinion, is an even more coveted prospect, so the Lions should seriously mull overtaking the ND product.

Award-winning sports journalist, enthusiastic and versatile writer, which engages in copy for a diverse audience. Looking for a challenging position as a sports writer where I can further develop my skills. A team player who will integrate with other to form a strong unit striving to provide exceptional sports content. Committed to accuracy and able to meet deadlines. Proficient in coordinating sports content across multiple mediums and platforms.

Best Bryce Young NFL fits in 2023
Should the Saints bring back Gregg Williams?