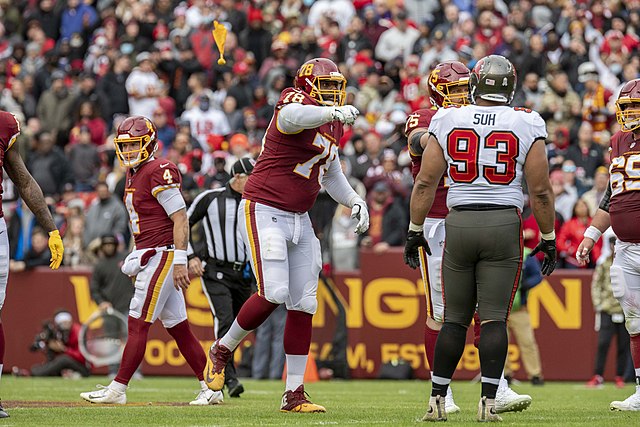 The New England Patriots have been linked to the five-time Pro Bowl selection Ndamukong Suh after Suh was spotted in Fenway Park (Boston Red Sox stadium). It was reported by Ian Rappaport that Suh didn’t visit with the Pats, but it would make sense if the Pats had a strong interest in the former Lions DT. Tyrann Mathieu recently visited the Saints after having prior arrangements in New Orleans. Suh could decide to stop by the Pats facility soon or still return to hang out with Belichick due to the logical fit between the two sides.

Suh has the excellent athletic ability and he’s a force to be reckoned with from multiple spots on the DL. The Patriots like to play out of multiple fronts, so Suh could blossom from the one technique, three-technique, and DE.

Suh is still a very good football player and he showed that last season. He recorded six sacks, 7 tackles for loss, and 13 QB hits. He does an excellent job of taking care of his health, so he can perform at a high level at age 35.

The Pats could use more explosion for Mac Jones on offense, but they could also benefit from more beef and talent in their defensive front. The DE/OLB Chase Winovich was shipped off to the Cleveland Browns and the Pats really haven’t signed many defensive pieces in free agency. In particular, they haven’t signed any DL in free agency. Suh would absolutely be a fantastic signing and a true upgrade over Davon Godchaux.

Belichick and Suh fail to throw in the gloves at late stages in their careers. If Suh doesn’t return to Tampa Bay with the highly motivated Tom Brady, it would be very fitting if the legendary DT joins Brady’s former mythical head coach in 2022.