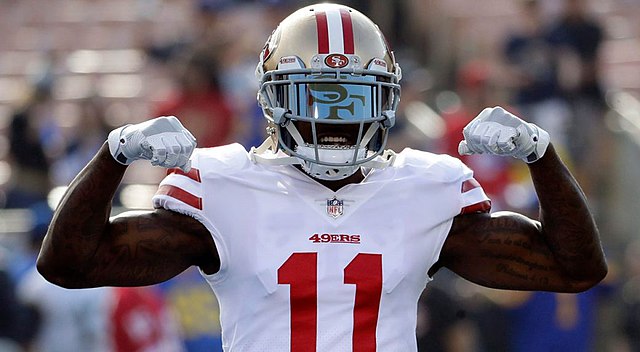 Who is the best Deebo Samuel replacement?

It seems imminent that the San Francisco 49ers will trade away the gifted WR/RB Deebo Samuel in the near future. Samuel is fed up with being a workhorse RB (outside of being a WR) and he wants a new home to only play the WR position. It seems that Samuel doesn’t enjoy the prominent RB/WR role in a similar way that the prolific swiss army knife Percy Harvin did for the Vikings.

The offensive genius Kyle Shanan will have to find a way to replace the production of Samuel, but SF will certainly receive a lot of compensation in a likely Deebo Samuel trade. Shanny can absolutely use extra draft ammunition to replace Samuel. Here are a couple of draft options for the 49ers.

The 49ers ought to be in love with the ability of Western Michigan WR Skyy Moore and Alabama WR Jameson Williams. Moore clocked a 4.41 40-yard dash and he’s one of the most explosive WRs in the draft. He’s quietly rising up draft boards and he would be a perfect slot WR to catch screens and quick slants from Trey Lance. Williams is clearly the fastest WR in the draft and a true steal if he soon returns to 100%. If the 49ers garner the Packers first-round pick, they could be in a prime position to select Williams or Moore.

The San Francisco 49ers could reunite with blistering fast free agent WR Marquise Goodwin. Shanny isn’t scared to ink a rusty weapon and insert him into his offensive attack. He’s attempted to resurrect Jerick McKinnon and Jordan Reed in recent memory. The former 49er could have career numbers with the big-arm second-year QB in his second stint in Shanahan’s offense. SF could surely bring in Goodwin, regardless of their desire to draft a WR with a potential early draft pick in the 2022 NFL draft.