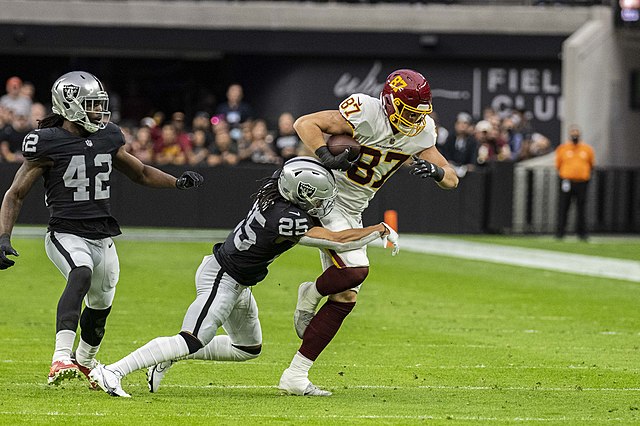 Who is the top CB target for the Raiders?

The Casey Hayward-less pass defense in Las Vegas could surely benefit from more talent at their cornerback position. Rock Ya-Sin and Trayvon Mullen haven’t quite cemented themselves as consistent, starting CB options in Sin City. With that said, I’m going to simply untwine three CB targets (and likely upgrades) for the Raiders.

It may seem like wishful thinking for any team to believe they can scoop up a talented free agent in June. Although, I believe the talented Raiders squad with a need for CB talent could join forces with Pro Bowl CB Joe Haden. The former Steelers CB has expressed that retirement isn’t on his mind. He could play with a defense that will have a terrific pass rush led by Maxx Crosby and Chandler Jones while having a realistic opportunity to win a Super Bowl in the near future.

Xavier Rhodes can be the bully, man to man CB that the Raiders desire on the outside. Rhodes was a Top-10 CB per PFF in 2020 and I believe he still has some juice left. The former Vikings first-round pick is still 31 years old – which is the same age as Stephon Gilmore. His ability to blanket top-notch WRs (such as Deebo Samuel) at this stage in his career can nicely be seen below.

The former Packers CB Kevin King, also known as the youngest CB on this list (27 years old), may be able to bounce back in LV. He recorded five interceptions in 2019, but it seems like he may be remembered better for getting torched by Scotty Miller in the NFC Championship. King may be able to prove his worth on a short-term deal behind a talented Raiders pass rush in 2022.