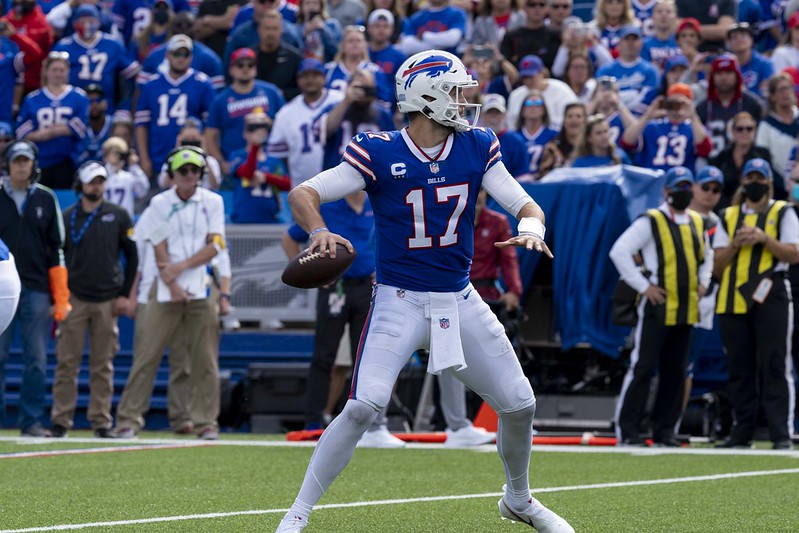 Welcome to our new feature where we recap a particular player’s journey in the 2022-2023 NFL Fantasy Football Season. This article features preseason expectations, draft expectations, overall season production, and critical moments during the season. We will do this for all 32 teams as we highlight a player per team.

A lot of hype was surrounding Josh Allen in the previous season as his last appearance was the AFC Divisional game vs the Chiefs. He led a comeback and was up by 3 with 13 seconds left. Then Patrick Mahomes happened. A lot of expectations surrounded Josh Allen as people were saying the 2022-2023 season would be his MVP season.

The Buffalo Bills QB didn’t disappoint as he was a top-10 QB in 13 of the 16 weeks he played in. We didn’t include the Week 17 affair with the Bengals for obvious reasons. His best game of the season was a matchup with the Pittsburgh Steelers in Week 5 where he threw for 424 yards and four TDs and rushed for 42 yards. This led to a 36.16 FP performance. He averaged 24.07 points per game and could be relied upon all the time. He finished 2nd in both STD and PPR with 399.24. For next season, Josh Allen will be in the conversation for the top pick in fantasy football again.

CRITICAL MOMENTS DURING THE SEASON

In the first game of the season, the Buffalo Bills took on the defending Superbowl Champions, Los Angeles Rams/ Josh Allen was unstoppable with 353 total yards and three TDs. This game showed that the Buffalo Bills were indeed Superbowl contenders. The play of the day was this TD pass to Steffon Diggs.

At this point, Josh Allen was dominating the Dolphins throughout his career. This game however turned out differently. The Miami defense stopped the Bills’ offense and forced Josh Allen to throw a lot. Allen ended the game with 400 yards passing on 63 attempts and just two TDs.

We have highlighted this game as Josh Allen’s top fantasy performance of the season. Josh Allen started the game with a 98-yard TD pass to Gabriel Davis. In the 3rd quarter, all hell broke loose. He connected again with Davis for a 62-yard TD. He also threw a 15-yard TD to Steffon Diggs and a 24-yard TD pass to Khalil Shakir. A dominant offensive performance.

In the biggest game of the week, Buffalo visited Kansas City to face the Chiefs after their classic in the AFC Divisional Match. With a minute left in the 4th quarter, Josh Allen threw a 14-yard TD to Dawson Knox for the lead and the game. Now, time will tell if Buffalo can repeat this performance if they face KC in the playoffs.

This was Buffalo’s first game since the Damar Hamlin health scare the previous week. A lot of anticipation was in the air as the world was gonna see how Buffalo responded on its first game back. The first play of the game showed the world how Buffalo would respond. Josh Allen’s face says it all.