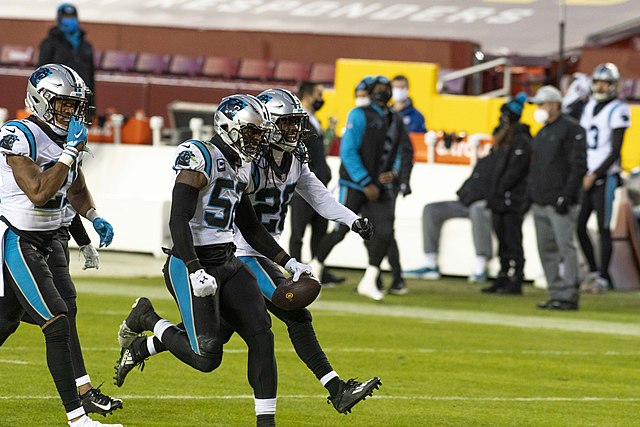 The Detroit Lions are strongly rumored by countless NFL analysts to select Malik Willis second overall in the near NFL draft. It’s also a possibility that the Lions could trade back in the first round and select one of the top QB prospects.

With that said, it may be wise for Dan Campbell to trade away his veteran quarterback Jared Goff. It’s obvious that he’s respected for surviving his situation in 2021, but it would make sense if the Lions placed their utmost confidence in a rookie QB. Plus, it’s clear that Goff doesn’t carry a superb ceiling. The San Francisco 49ers are still looking for the right home for Jimmy G and it would make sense if DET is soon looking to trade away their 2021 starting QB. So, the question is: which teams could trade for Goff in the near future?

It’s clear that Goff would be a cheaper option than Baker Mayfield for the Panthers. He could be cheaper than Mayfield and still more talented than Sam Darnold for CAR. In fact, Goff was quite more impressive than Darnold in 2020. Here is a closer look at how productive each QB was last season:

Goff could defintely be a nice value pickup for the Panthers, especially if the Panthers don’t win the Mayfield sweepstakes.

It’s far from certain that former BYU legend Zach Wilson will bounce back in his second season. Regardless of his cool throw against the Tennessee Titans, he was still benched in favor for Mike White. Wilson ousted a 3-10 record, 9 touchdowns, 11 interceptions, and a 55.6 completion percentage. The HC-QB combo are really on the hot seat in 2022, so it would be wise to improve the QB via a reasonable cost. It’s also safe to say that Goff is an upgrade over the annoyingly popular Joe Flacco in NY.

The Tampa Bay Buccaneers don’t exactly have the fountain of youth in Tom Brady. Brady will most likely retire within a couple of seasons. Goff could be a sneaky QB2 option for the Bucs, as he provides a modest combination of youth and talent. It was clear that the Bucs were looking to improve from Kyle Trask in Brady’s short-lived retirment. The Bucs GM Jason Licht could make a wise investment by inking a veteran to compete with Trask this off-season.

The Tennessee Titans are the perfect darkhorse team to acquire Goff in my opinion. Ryan Tannehill took the QB1 spot in Tennessee away from Marcus Mariota and Goff could potentially remove the keys to the Titans QB spot away from Tanny. If Tannehill still remains the starting QB for the Titans, it would still make sense for the reigning AFC one seed to improve their QB2 spot. It may also intrigue Jon Robinson that Goff is six years younger than his current starting QB.