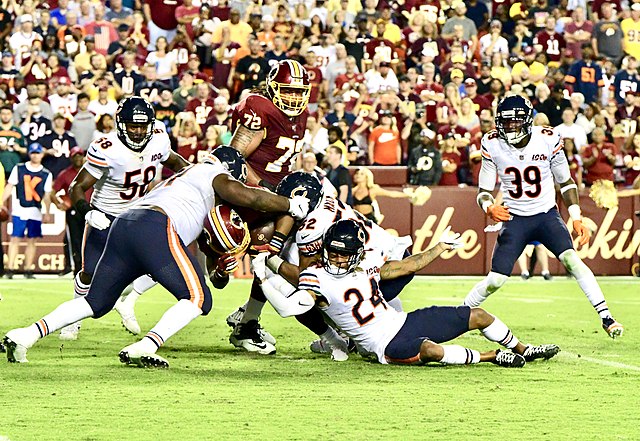 Is the Bears 2022 schedule favorable?

It appears that Justin Fields will have a smile on his face after the Chicago Bears 2022 schedule was released yesterday. The team in Chi-town have the 24th easiest schedule in the NFL. The gritty Bears will face a less talented Green Bay Packers offense, but Fields and Matt Eberflus will also face a schedule that is near the opposite challenge of the LA Rams schedule (most difficult schedule) in 2022.

With that enunciated, I’m going to untwine three takeaways from the Bears 2022 schedule.

The Bears will kick off the season against the San Francisco 49ers and Trey Lance. I believe the Bears show-down against SF is arguably their best opportunity to play spoilers, as they play an unproven QB in the first week of the season. If the Bears can have splash plays dialed up with Darnell Mooney or Velus Jones Jr, they could force Lance to really battle through the air and he could be out of his comfort zone. Fields also have a chance to prove he’s more talented than the 49ers QB1 that was selected ahead of him in the 2021 NFL Draft.

Justin Fields will face a monster challenge in Week 16 at home against the Buffalo Bills. If Fields can manage to beat the Bills, it may convince his followers that he is their future QB beyond 2022. He definitely needs to play better than the starting performance from previous sophomore Tua Tagovailoa against BUF: 21/39, 205 passing yds, 0 TDs, 1 INT.

It will obviously be a serious test for Fields to beat the Green Bay Packers in 2022. Although, the Bears could really turn the tide with their confidence against GB by splitting games with them in 2022. I believe the battle between the 2021 NFC Defensive Player of November Robert Quinn and the healthy David Bakhtiari will be very enjoyable. Quinn had 3 sacks combined against the Packers last season and they will need him to be unstoppable against A-Rod, especially without Khalil Mack. Quinn will dream about clinching a win with a sack against Rodgers and then doing the belt.