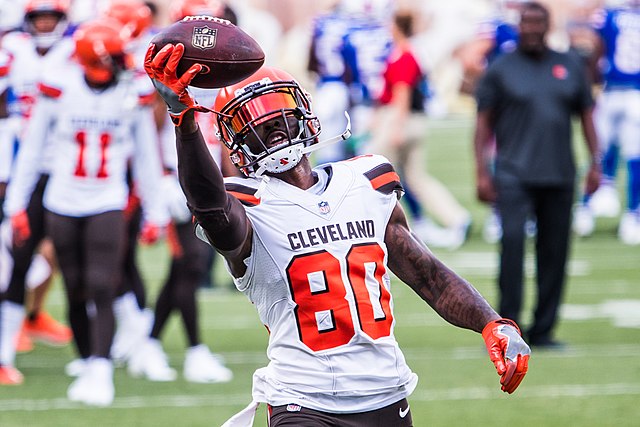 The New Orleans royalty Jarvis Landry agrees to a one-year contract with the New Orleans Saints today. The 29-year-old wide receiver will join fellow Saints weapons Michael Thomas, Chris Olave, and Alvin Kamara. It’s clear that Jameis Winston is licking his chops with the new firepower in his offense.

Deshaun Watson might have picked the Cleveland Browns over the Saints, but Landry’s heart clearly chose to make magic happen in the Caesars Superdome next season. The former Brown made each Pro Bowl from 2015 to 2019. The former LSU WR ran a slow 4.77 40-yard dash at his NFL combine, but he didn’t fail to become a star WR in the NFL.

Landry has been a pillar of consistency in his career, but he did his worst season of productivity in 2021. He missed a career-high five games last season, while his QB Baker Mayfield fell off a cliff. So, it’s reasonable that Landry wasn’t a stud in a Browns offense that also witnessed OBJ perform at a mediocre level.

Landry is still a very good football player and I expect him to be in a superb situation with the Saints long-time OC Pete Carmichael and big-arm QB in Winston. Landry has often been the NFL’s top slot WR and he can shine in the slot for NO, while Thomas and Olave can be stars from out-wide. It will be quite difficult for opponents to prepare for the speed of Olave while giving Thomas and Landry tough matchup-ups.

The Saints ranked 32nd in passing last season and I would be shocked if they weren’t a Top 10 passing offense next season. They will likely sling the rock without Alvin Kamara in his six-game absence and they are really able to throw the ball in the short game and deep down the field. I believe the 2021 Bengals passing offense is a potential realistic comparison for the 2022 Saints passing offense. The Bengals had three WRs with 800+ receiving yards, while Joe Burrow was fifth in passing yards and eighth in passing touchdowns. It can be hard to believe mystic growth, but Winston’s 2021 production combined with his new weapons could lead him to become a stat (hopefully, not a turnover) machine in 2022.