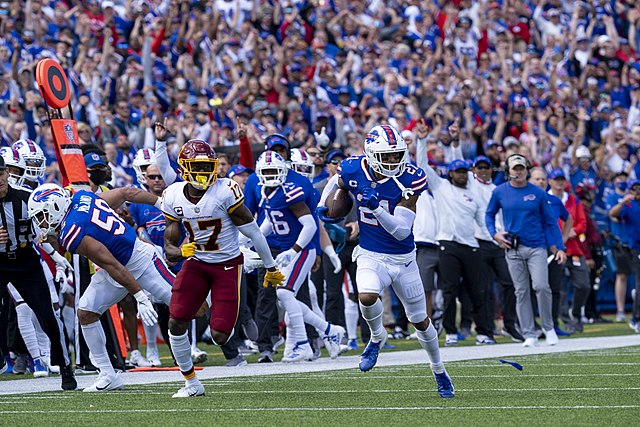 The Buffalo Bills have had one of the NFL’s best defenses over the past few seasons. However, they have been seemingly lacking a certain spark to really make that side of the ball scary to opposing teams. While they have some extraordinary talent on defense already, they were able to solidify it even more in the 2022 offseason, bringing in some top tier talent to truly make this unit a force to be reckoned with. In this article, I will cover 3 reasons why the Bills could have the best defense in the league this year.

Addition of high quality CB2 via the draft

The first notable addition on this list is the Buffalo Bills first-round pick this year, who was CB out of Florida Kaiir Elam. Elam has really strong upside as a cornerback in the NFL, and his press man coverage is something impressive to witness. Elam has all the physical traits, at 6’2″ 197 pounds, and with exceptional athleticism (4.39 49-yard dash, 37.5″ vertical, 6.98 3-cone) he has all the makings of an elite prospect. Let us not forget that the Bills traded down in the 2017 draft to pick 27 which allowed them to select their premier CB1 Tre’Davious White, and with Elam being taken in a similar range (pick #23) it would be wise to not overlook him just because he was not top 15.

Bringing in a top OLB in Von Miller

The next addition to the Bills defense, and likely the most well-known, was outside linebacker Von Miller. Miller is coming directly off a Super Bowl win with the Los Angeles Rams, which gives the Bills some of the pedigree that comes with a player who understands what it takes to win. Not only should his mentality be a boon to the Buffalo defense, but also his on-the-field production which has been some of the best in the league lately. His ability to get to the QB, and put pressure on them/get in their airspace is one of the most amazing things about him, and his “ghost move” is one of the most intriguing in the league.

Von will be an amazing addition to the Bills defense, and will be the core of their defense & linebacker unit for the near future without a doubt.

Leslie Frazier is one of the more intriguing defensive coordinators in the league, primarily because of how he runs defensive schemes. Frazier runs a base 4-3 style with cover 2, but prioritizes the blitz relatively heavily, which bodes extremely well for Von Miller as he took 71 blitzing snaps in 2021. While Leslie has been heavily criticized at times for his defense faulting against the Kansas City Chiefs this past playoffs, he has been a relatively stout coach to date and one game does not necessarily define his tenure with the team.
We should have a great chance to see what Frazier is able to whip up for the Bills in the 2022-2023 season, as he has some amazing talent to work with at every level now, and much the ability to run a wide variety of play types due to this. With this stated, this is why I believe the Bills will have a top defense in 2022, if not the best.